No addition to Boyz squad 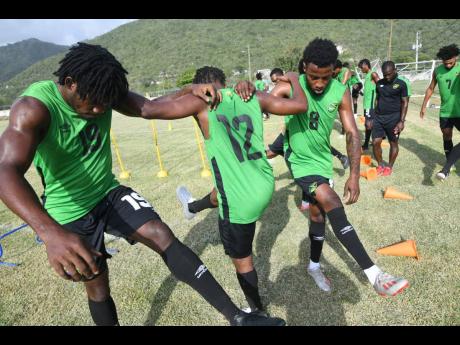 File
Several members of Jamaica’s national senior football team go through a drill at the University of the West Indies/Jamaica Football Federation/Captain Horace Burrell Centre of Excellence on Tuesday, August 27, 2019.

There will be no new additions to the Reggae Boyz’s 19-man squad, which was named yesterday, to face the United States in a friendly international in Austria on March 25.

According to some media reports, six local players who received US entry visas on Wednesday -Colorado Murray, Akeem Chambers, Treyvon Reid, Emelio Rousseau, Ricardo Thomas, and Kemar Belnavis, – were to leave the island yesterday or early this morning to join up with the rest of the squad in Washington DC.

Lamar Walker and Jashaun Anglin, who recently signed contracts to play for USL team Miami FC were also expected to leave the island on Friday to join the squad.

However, JFF media officer, Earl Bailey, confirmed that only the 19 players announced by the federation yesterday will make the trip to Austria.

He noted that the players left back in Jamaica did not hold a US visa and could not make the emergency trip to the United States on Tuesday to meet their visa appointment yesterday morning at the Austrian embassy.

“Some players (left in Jamaica) were down to go to the (US) embassy today (Wednesday). Those players were in camp but they didn’t have a (US) visa, and they would have to come to the US to make the appointment (Wednesday), so that’s why they didn’t make the list,” said Bailey.

“The seven (local) players who are here (United States) are the seven players who got (Austrian) visas and will travel with the team,” he said. “None of those players that got (US entry) visas today (yesterday) will be part of the squad to travel to Austria.”

He noted that Walker and Anglin, who already have their US visas, were unable to travel as their passports are currently at the (US) embassy awaiting work permits to join their new club.

“They didn’t have their passports to travel, so the 19-man list (which was announced), will be the team that is representing Jamaica,” he stated.

The team is scheduled to leave the US capital tomorrow.