Nipster the horse to beat 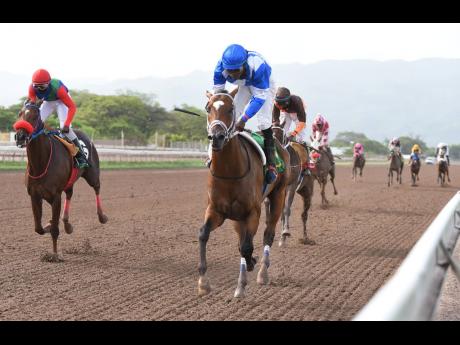 NIPSTER’s annihilation of TOONA CILIATA, SENTIENT and MAHOGANY, last Boxing Day, won the then Gary Subratie-trained runner Horse of the Year honours, stalking the pace from seventh before swooping down into third at the top of the lane then distancing himself from the country’s best horses in the Ian Levy Cup at eight and a half furlongs.

Having established himself as undoubtedly the best horse in the country, pound for pound, when running in excess of six and a half furlongs, NIPSTER must be the horse to beat on his seasonal debut in the Chairman’s Trophy at seven and a half tomorrow.

A Graded Stakes/Open Allowance event in which topweight is determined by distance, maintaining the practice for the Chairman’s Trophy has NIPSTER, running with 126lb, a mockery, especially to SENTIENT at 118lb, who wasn’t even in Robert Halledeen’s rear-view mirror on Boxing Day when giving up three pounds at eight and a half furlongs.

In the bastardised group created to incorporate the two or three ‘A’ Class (Graded Stakes) horses within the level below (Open Allowance), the top-rated runner is automatically assigned 130lb if the distance is seven furlongs and below. For trips in excess of seven, the topweight carries 126lb.

TOONA CILIATA, carrying 126lb in the Ian Levy, also got his fair share of hiding from NIPSTER, all of eight lengths. He returns with 121lb, down five pounds, but still has much to find against the Horse of the Year, who has really been flexing his muscles at exercise, almost showing off for his new barn since moved from Subratie to Anthony Nunes.

Though outsped by MAHOGANY at six and a half two weeks before the Ian Levy, NIPSTER had also outclassed SENTIENT, by almost seven lengths, in finishing second behind the winner’s terrific 1:16.1.

Champion owner Michros has retained confident Robert Halledeen aboard his runners, which are now spread between Patrick Lynch and Nunes, maintaining the all-important synergy of horse and rider for NIPSTER.

Lightweights ROY ROGERS and FATHER PATRICK will ensure a pace that suits NIPSTER, a deadly closer if there was ever one.