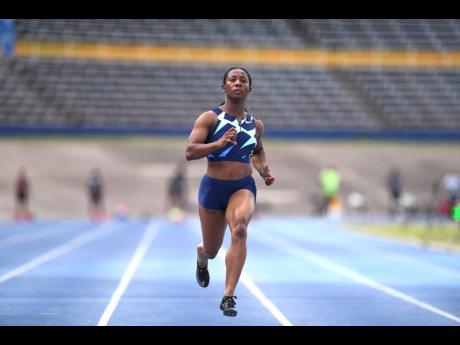 Two-time Olympic and four-time World champion Shelly-Ann Fraser-Pryce will make her season’s debut around 4:30 this afternoon, when she competes in Section Two of the women’s 200m at the Velocity Fest Meet scheduled for the National Stadium at 4 p....

Two-time Olympic and four-time World champion Shelly-Ann Fraser-Pryce will make her season’s debut around 4:30 this afternoon, when she competes in Section Two of the women’s 200m at the Velocity Fest Meet scheduled for the National Stadium at 4 p.m.

With most of the country’s senior athletes, who are preparing for the Tokyo Olympic Games this summer, Fraser-Pryce will make her first competitive run since last August when she competed in two of the Velocity Fest meets. Those were the only meets for the season for senior athletes last year because of the COVID-19 pandemic.

Fraser-Pryce, now representing Elite Performance, will run out of lane five and will face the unbeaten Sade Williams, of Barbados, who is based at the MVP Track Club. Williams has been impressive in both Jamaica Athletics Administrative Association (JAAA) meets so far, having won the 200m.

Sprintec Track Club’s Ronda, who won the women’s 400m a week ago, teammate Remona Burchell, and Stephenie Ann McPherson of MVP make up the other members of Section two.

Edwin Allen High School’s twins, Tia and Tina Clayton, will be racing among their seniors in the women’s 100m at 5:30 p.m. In Section one, Tia will be making her season’s debut and she will come up against former Hydel High School sprinter Ashanti Moore, who won the women’s 100m at the first JAAA meet, and placed second in the 200m last week.

In Section One, Tina, who has competed in the 100m and 200m at all the JAAA Qualifiers so far, will be hoping to get the better of MVP’s Natasha Morrison and Shimayra Williams of Elite Performance, who won the 100m last week with a personal best 11.34 seconds.

Keeno Burrell of Racers Track Club, who won last week, and Demar Murray of G.C. Foster College are favoured in this race.

After a run of 20.50 seconds to win the men’s 200m last Saturday, Racers’ Miguel Francis looks set to continue his good form when he competes in Section Three of the half- lap event at 4:45 p.m. Francis’ training partners, Oblique Seville and Zharnel Hughes, Titans Track Club’s Jevaughn Minzie, and MVP’s Julian Forte will also feature.