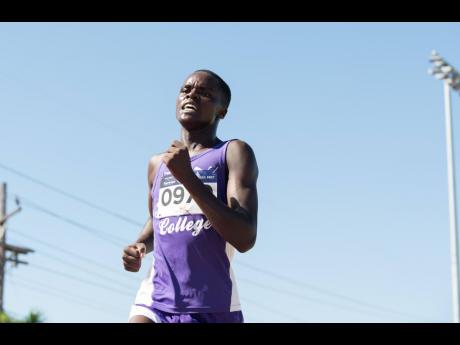 Former ISSA/GraceKennedy Boys’ Athletics Champions Jamaica College (JC) gave an early warning to defending champions Kingston College (KC) that they will be a threat to their crown at the Championships next month. JC produced a dominating performance on the track, especially in the final of the 1500m, where they swept all events at the opening day of the Anthrick Corporate Area Development Meet at the National Stadium yesterday.

J’Voughnn Blake clocked 3:56.72 minutes to win the Boys’ Class One 1500m to repel the challenge of KC’s Aron Tanui, who came into the race as the favourite. Tanui clocked 3:56.87 minutes for second, with his teammate Giovouni Henry taking third in 4:04.01 minutes.

Khandale Frue made it a quick double for JC after getting the better of his teammate in the Class Two event. He stopped the clock at 4:11.39 minutes for the win, with his teammate Kemarrio Bygrave (4:11.69 minutes) taking the runner-up spot as KC’s Darnel Edwards came third in 4:12.27 minutes.

Calabar’s Jordan Turner was in record-breaking form in the long jump yesterday. He erased former KC jumper Shaquille Lowe’s record of 7.75m, set in 2019, with 7.82m to take the Class One event. His teammate Luke Brown was second with 7.45m, with the bronze going to JC’s Uroy Ryan, who jumped 7.23m.

KC also had wins in the field as Jaydon Hibbert, aided by a positive wind reading of 4.4m per second, won the Class Two Boys’ triple jump with a mark of 15.55m. Calabar’s Javar Thomas’ 14.41m placed him second ahead of JC’s Michael Curriah, who was third with 14.04m.

On the girls’ side, The Queen’s School took quinellas in both the Class One and Class Two 1500m events. In Class One, Nastassia Facey won in 5:22.73 minutes, ahead of Shenell Simms (5:28.88 minutes) and Excelsior High School’s Gabrielle Gordon, third in 5:53.55 minutes.

In the field, Wolmer’s Malai Cunningham took the Class Two High jump after soaring to 1.60m, ahead of Excelsior’s Chenessa Davis, with the same height. St Andrew’s, Jo-Anna Pinnock was third with 1.55m.

Tatanya Anglin of Merl Grove High School won the Class Four section with a height of 1.40m, while Omaria Constable of Excelsior captured the Class Two long jump with 5.54m.

Yesterday saw preliminary rounds in other track events with the finals to be competed today starting at 8:30 a.m. The meet is the first of four regional meets which will be used as a qualifying event for next month’s ISSA/GraceKennedy Boys and Girls’ Athletics Championships.