Supreme Soul too experienced to lose 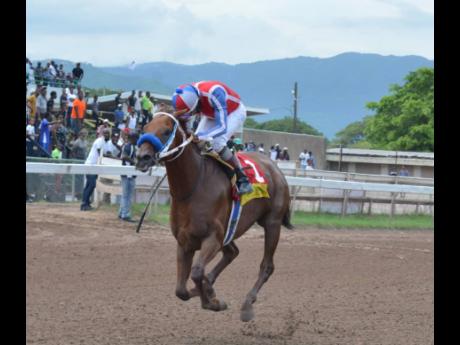 AFTER lounging around at exercise with high-priced, three-year-old stablemate, BLACK BOMBSHELL, hardly raising a hair off a 60-day lay-up, two weeks ago, SUPREME SOUL has been declared to race in a figure eight for tomorrow’s overnight allowance at nine furlongs and 25 yards, getting his first real piece of exercise gallop on Monday, seven furlongs in 1:33.0.

Don’t be fooled by the seemingly innocent clocking at exercise off the lay-up. SUPREME SOUL needed only one race, off a near nine-month break last July, to beat CRIMSON and SUMMER SUN by a neck at nine furlongs and 25 yards. He played possum in his next outing behind stablemate TOONA CILIATA, before having his head lopped off by SENTIENT when sticking it out in the Chairman’s Trophy a month later.

It will be very interesting to see how SUPREME SOUL performs after finishing seventh at a mile. Running as the 6-5 favourite, the 2019 Triple Crown winner was eased from a furlong and a quarter out by Shane Ellis, yet staying on, tenderly handled, among other runners being ridden flat out.

Ellis even had time to undo his goggles, inside the last half-furlong, possibly to get a better view of ROY ROGERS rallying to hold off COCO CHANEL and late-charging BIGBANG in an exciting finish, which graduated the battling grey to open allowance/graded stakes as fodder for NIPSTER, TOONA CILIATA and company.

Everything about SUPREME SOUL screams out-of-class on his favoured route, running the bends against 11 rivals, some of whom have never won a two-turn race. At the weights, getting five pounds from off-colour MARQUESAS and almost sitting level with MESSI, UNCLE VINNIE, BIGBANG, MASTER OF HALL and ROHAN KABIR, SUPREME SOUL’s class and stamina should prevail.