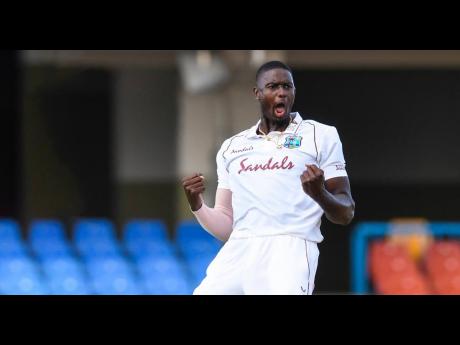 Former captain Jason Holder showed his leadership qualities yesterday. This time, it was the ball that he led with, bagging five wickets, as the West Indies held the ascendency after day one of the first Test against Sri Lanka in St John’s, Antigua.

Holder put down a high-quality Test match spell of fast bowling to claim five for 27 from 17 overs and four deliveries to help dismiss the visitors for 169. The home side then batted out the 13 overs to head into today’s second day on 13 without loss, trailing by 156 runs, with John Campbell on seven and captain Kraigg Brathwaite on three.

Buoyed by their recent good showing in the white-ball format, Brathwaite decided to send the visitors in on a moist Sir Vivian Richards Stadium surface after leaving out Darren Bravo and Jomel Warrican from the playing eleven.

The Sri Lankans found runs hard to come by as the West Indies opening bowlers held a tight line and bowled with attrition. However, it was off-spinner Rahkeem Cornwall who got the first breakthrough, having captain Dimuth Karunaratne caught at short leg by Campbell for 12 at 17 for one.

Brathwaite then got in on the act for the second wicket as his quick pickup and throw knocked down the stumps to run out Oshada Fernando for four at 29 for two.

Then Holder began his demolition work as he induced the edge of Dinesh Chandimal with the last ball before lunch for four to leave the visitors wobbling at 54 for three at the interval.

Kemar Roach then decided that he wanted a piece of the action, and he picked up the first of his three wickets when he knocked over Dhananjaya de Silva for 13 on the resumption.

Seventy-six for four then became 92 for five as Roach, who got the older ball to swing, found the edge of Pathum Nissanka, who was caught by Holder in the slip for nine.

Holder then grabbed the next three wickets, including that of the innings’ top-scorer Lahiru Thirimanne, who was bowled for a well-played 70 after batting a couple of minutes shy of five hours.

The Barbadian then wrapped up his eighth five-wicket haul in Test cricket when he dismissed Lasith Embuldeniya leg-before-wicket for three to dismiss the visitors for 169 in 69 overs and four deliveries.

Holder, who was excited to be back on the field for the West Indies, summed up what had been a good start to the Test match so far for the hosts.

“I am just glad that today (Sunday) was my day and that I can contribute towards the team’s cause and just glad that I could put the team in a pretty good position,” he said.

V Fernando not out 1

*K Brathwaite not out 3

J Campbell not out 7