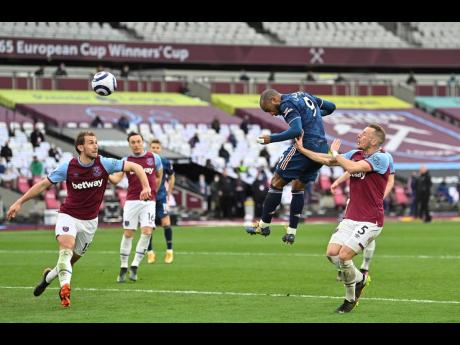 Arsenal are nine points from the four Champions League places after recovering a point from a game they looked to have lost after conceding three times in the opening 32 minutes.

Jesse Lingard celebrated his recall to the England squad by blasting the ball into the net from the edge of the area in the 15th from Jamaica prospect Michail Antonio's cutback.

It was a quickly taken free kick by Lingard that led to Jarrod Bowen tucking the ball into the net inside two minutes of the opener. And Tomas Soucek turned in Antonio's downward header to give the hosts what seemed a commanding lead.

Arsenal started to chip into it in the 38th when Lacazette's shot from Calum Chambers' cross deflected off Soucek.

Another cross from Chambers led to Craig Dawson inadvertently turning the ball into his own net in the 61st. The fightback was capped in the 82nd when Lacazette headed in powerfully from Nicolas Pepe's cross.