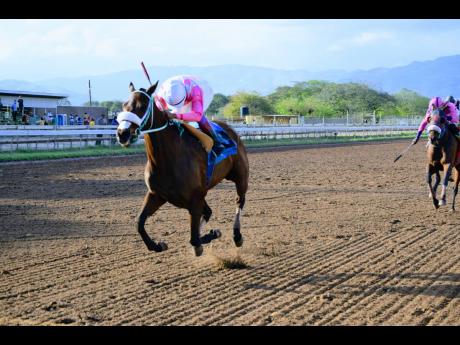 Thomas’s four-timer moved him within two wins of Dane Nelson with whom he shared last season’s jockey’s title.

Nelson started the weekend on 20 winners. TOONA CILIATA took him to 21 on Saturday. He won astride PURPLE WAYNE and LATAPY yesterday to stay ahead of Thomas in the early running for the jockeys’ title.

Thomas, however, was in sparkling form, winning four events between races five to the 10, producing Wayne DaCosta’s HOVER CRAFT alongside MARQUESAS a furlong and a half in the feature out, scoring back-to-back Sunday victories with the 11-year-old gelding.

A two-time champion rider, Thomas won the fifth, sixth, and eighth races with DEE DANGER, MR UNIVERSE, and SENSATIONAL ENDING, respectively, the first of two victories he notched for ailing trainer, DaCosta, whose charges are being saddled by son Jason.