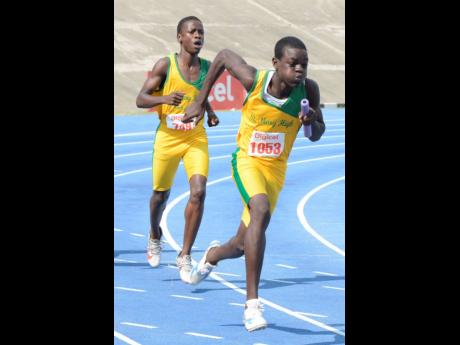 File
Omarion Dennis (right) sets off after receiving the baton from Demetry Goehagen and leading St Mary High School to a win in the Class Three boys 4x100m final at Eastern Athletics Championships on March 5, 2019 at the National Stadium.

Coaches from schools along Jamaica’s eastern corridor have expressed disappointment with the last-minute news that the Eastern Athletics Championships, which was scheduled to take place at the National Stadium yesterday, did not receive government approval and could not go ahead.

Intended as a regional qualifying meet for next month’s ISSA/GraceKennedy Boys and Girls’ Athletics Championships, Eastern Champs was expected to bring out some of the top young athletes from schools in St Thomas, Portland, St Mary and sections of St Andrew and St Catherine.

The Central Athletics Championships, which was expected to get under way today at the G.C. Foster College of Physical Education and Sports, was also affected.

Jamaica Athletics Administrative Association president, Garth Gayle, was informed late Monday night by government officials that permission for the meet would not be granted, putting a dent on the athletes’ preparation for next month’s major championship.

Dwayne Williams, the man in charge of St Mary High School’s track and field programme, Kevin Brown of Buff Bay High School, and Rohan Bryan from Morant Bay High School, all underlined their disappointment with the developments and the impact it has had on the student athletes from the area.

“Myself and the athletes are traumatised. I got the news about 10 p.m. (on Monday), just after a meeting with the athletes, where they were given instructions, including protocols for the meet which we were expecting to compete at the following day,” said Williams, whose team won last year’s girls and overall titles.

“I sat in my car for a while thinking on how I would inform them. When I did, they were all in tears,” Williams continued. “Most of them have stated that they are going to quit and concentrate on their academics as there is uncertainty around Champs.”

According to Brown, coach of defending boys champions Buff Bay, his athletes are devastated by the news.

“This should have been our first meet this season and they are very concerned not knowing how they will qualify for Champs,” Brown said. “I know that with this new wave of COVID-19 cases, the Government wants it under control and I do understand, but I still want to know how the athletes will qualify for Champs.”

Bryan, former head coach and current technical director of the Morant Bay High School team, said there were more questions than answers at this point and, like his peers, he is anxiously awaiting word on the qualifying opportunities that will now be put in place for the athletes.

“All plans were in place for the meet and we only got a text message on the situation. We do not know if the meet has been cancelled or postponed. I am at a loss for words,” Bryan said.

“Now we need to know how these athletes will qualify for Champs. I am extremely disappointed because there is no dialogue with us, the stakeholders,” he added.