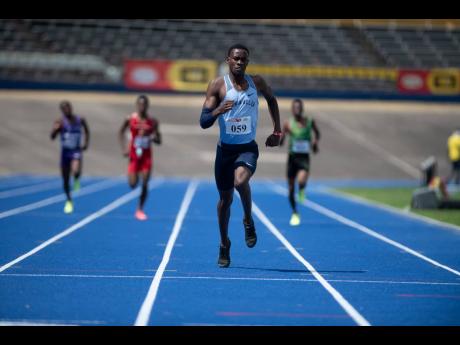 Head coach of Rusea’s High School’s track and field team, Roderick Miles, and Calabar’s assistant coach, Errol Messiah, are in favour of moving the meet days for the developmental season to adapt to further curfew restrictions announced by the Government on Sunday.

For the next three weekends, starting on Saturday, curfew hours will begin at noon and end on Monday at 5 a.m. The restrictions, which will last until April 13, will potentially affect the continuation of the developmental season, which has seen meets taking place across the island every Saturday since the February 27 restart of competitive athletics locally.

Local Government Minister Desmond McKenzie had expressed his satisfaction with how the protocols were being enforced and said that the meets could continue as long as the standard is upheld.

However, Miles says that in light of the current health situation, consideration should be made to host meets during the week to adjust to the latest changes.

“I don’t see what’s the difference if a track meet is held on a Thursday (or) a Saturday. You just have to work around it and work with it. It’s just for the organisers to put their heads together and put on some Wednesday meets and put on some Thursday meets,” Miles told The Gleaner. “It doesn’t make a difference. The important thing is to get the athletes to compete.”

The current development season is expected to continue until April 3 with the ISSA/GraceKennedy Boys and Girls’ Athletics Championships (Champs), which was pushed back because of the recent surge in COVID-19 cases, scheduled for the last week in that month.

Junior athletes have enjoyed four weeks of competition so far but the latest restrictions threaten to affect their qualifying chances for Champs.

Miles says that change would benefit those who are in their final year of eligibility or those who seek to compete in the World Under-20 Championships, which are slated for August.

Messiah says that the change would facilitate athletes being able to still have opportunities to get their respective qualifying times ahead of Champs, which is five weeks away.

“It would affect some people’s programme in terms of qualifying (for Champs), if the meets (don’t take place). You must be in the top whether it’s 16 or the top 24 (to compete),” Messiah said. “I believe it would be a good move to continue the meets and have them on weekdays.”

Jamaica Athletics Administrative Association first vice-president, Ian Forbes, said in a Gleaner interview on Monday that while pleased with the local government ministry’s feedback on the protocols and being able to continue, they await specific guidance regarding this week’s slate of events.