Cockburn gets support after racist attack 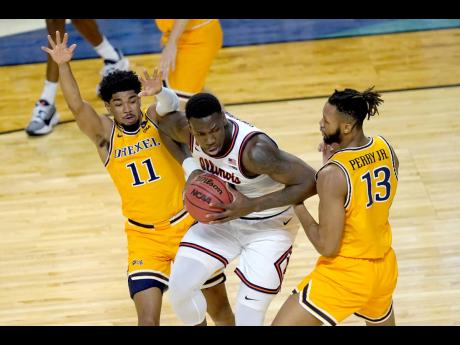 AP
Illinois ‘s Kofi Cockburn (centre) is pressured by Drexel’s Camren Wynter (left) and Tim Perry Jr, during the first half of a first-round NCAA college tournament game on Friday, March 19, at the Indiana Farmers Coliseum in Indianapolis.

National youth coach Lennox Lindo and Urban Knights manager Gordon Porter have come out in support of national basketballer and University of Illinois sophomore Kofi Cockburn, after reports that he was subjected to racial abuse online following his exit from the NCAA Men’s Basketball Tournament recently.

Despite scoring 21 points during their second-round game against eighth-seeded Loyola Chicago University on Sunday, Illinois, who were seeded number one in the tournament, were stunned by a 71-58 defeat, becoming the first of the number one seeds to be eliminated.

The message read: “Go back home ya bum. (Expletive) lost to Loyola. Go sit your monkey (expletive) on the couch.”

Cockburn captioned the post saying, “I blame his parents.”

It is a view that Lindo also shares and says that it is frustrating that incidents like this continue to happen.

“It’s really sad for one individual, and even a group, to come out and share those comments online. As he said, how some people are socialised and how they are raised would lead to comments like that,” Lindo told The Gleaner.

In an ESPN report, an Illinois spokesperson said that the matter is being investigated by the school, with the spokesperson disclosing that the source of the comment was identified by others on social media.

While confident that the team and the school will give him the necessary support, Lindo said that the vitriol he received after the defeat is disheartening.

“It is very disturbing, very painful perhaps for a person like Cockburn, who, coming out of Jamaica, is not accustomed to that sort of attack in terms of racial abuse and bigotry and so on. I know that it must be very difficult for him,” Porter said.

Additional, he says that it is critical for those national players who receive opportunities to play in the United States system, to be prepared for the challenges that they may face, and for them to get the appropriate support in circumstances like those.

It is the second incident of racial abuse to a college basketball player after their team was eliminated from the tournament.