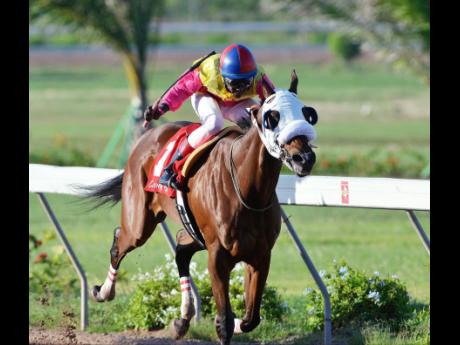 CAPTUREMYSHIP is nicely in at the weight, 117lb, getting seven pounds from DUKE but giving up possibly two to in-form foreigner SOLID APPROACH, who is hunting a fourth straight win at five furlongs straight on Tuesday.

The seven-year-old course specialist won so comfortably on last, that despite seemingly in over his head among open allowance runners, he must be given a shot at upstaging the sprinters he is up against.

SOLID APPROACH has a ferocious last-furlong kick, as a run-on sprinter, which should benefit her on the quicker stands’ side. However, Anthony Thomas has mastered the art of getting his mounts to the outer rail quickly, which could force Omar Walker down inside to the heavier mid-track, by which time the race could have already been won by CAPTUREMYSHIP.

In what appears a complemented line-up, Gary Subratie’s stayers, CRIMSON and SENTIENT, join stablemate DUKE. Subratie obviously didn’t want the event to be thrown out after DUKE’s strong run at five and a half furlongs to beat PATRIARCH, the fastest horse in training.

However, many a race have been complemented and lost with CAPTUREMYSHIP being a prime candidate for party crasher at his favourite distance and enjoying the form of his life.

DUKE was slowly into stride when he beat PATRIARCH and TREVOR’S CHOICE at five and a half. If he tries any such antic against CAPTUREMYSHIP, he will be running for either second or third place.

On paper, TREVOR’S CHOICE, who had attempted to chase PATRIARCH, appears the horse to beat. However, TREVOR’S CHOICE is no five-straight maestro nor did he appear too convincing on last, quickly surrendering his pursuing role to DUKE early in the stretch run. Something just doesn’t seem right with TREVOR’S CHOICE, who had reported off a two-month lay-up, his previous race being a last-furlong rally after PEKING CRUZ had zipped past him on the home turn at five and a half on December 27.

TREVOR’S CHOICE is working well, as usual, and could easily topple this field if reproducing his form of a year ago. However, the form sprinter and course specialist is, undoubtedly, CAPTUREMYSHIP, who ran ENGLAND’S ROSE ragged at the trip on December 23, setting up UNIVERSAL BOSS to close with a hurricane finish to win in 56.4.