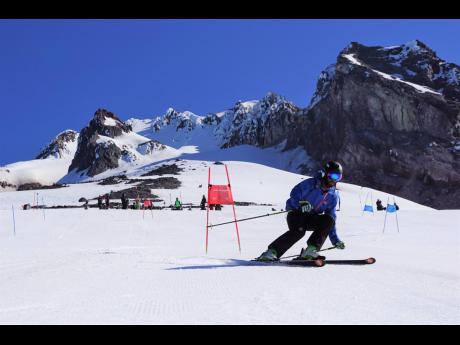 Skier Ben Alexander inched closer to his dream of becoming Jamaica's first representative in Alpine Skiing at the Winter Olympics, after slashing his scores from 505.68 points to 378 at a Snow King Mountain event in Jackson, Wyoming, where he resides, last weekend.

Olympic qualification scores are defined by the average of a competitor's best two results, and on Saturday, Alexander scored 381.96 and 374.05 in the great slalom race to end with his 378 average, leaving him just 218 points shy of the 160 required for qualification.

The results were also boost for Alexander, who has hopes of wrapping up his qualification by the end of the northern hemisphere calendar in April.

"It was a very challenging course, but being able to pull out my two best finishes despite those issues has been a huge boost to my confidence," Alexander told The Gleaner.

"I bought some new equipment and this was one of the reasons I was able to jump from 505 down to 378, and this has reinvigorated my charge towards the finish line."

The 37-year-old, who only started skiing competitively 14 months ago, will head to Minnesota this weekend for another two races and he will enter the event with optimism, as the course is not considered a difficult one.

"I have two races [today] in Lutsen, Minnesota," he said. "This venue is known to be very favourable for people at the back of the pack, such as myself, and I hope I can slash my scores even further there.

Alexander then travels to Colorado for another race on Tuesday. He then closes out the northern hemisphere season with back-to-back events in California in April.

"It is possible for me to go to this race (Minnesota) and get my scores closer the qualification status," he said. "But I don't think I will get there (by April 9) because I still need proper training to get my skills where it needs to be.

"So it is possible that it can come this weekend, or before the end of the calendar in April. But if it doesn't, the deadline is the 16th of January next year, so I have enough time."

Alexander said that he intend to use the southern hemisphere season, which runs from June to October, to improve his weaknesses, before finishing off the year in the European season, where expects to seal qualification.

However, in case he has difficulties getting to one of his preferred southern hemisphere destinations (Chile, Argentina or New Zealand) because of COVID-19 travel restrictions, he would like assistance from the Government.

The Winter Olympics Games is scheduled to take place in Beijing, China from February 4 to 20, 2022.