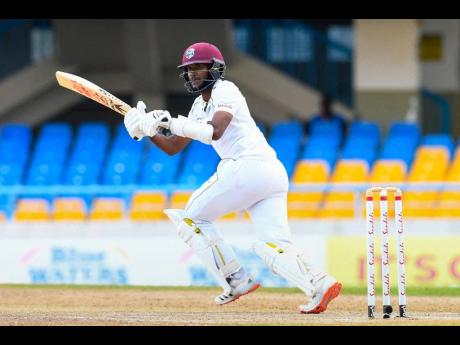 It was a day when the home side’s bowlers had to toil, but in the end, the West Indies would take a position of having the Sri Lankans 136 for three replying to 354, following Day Two action of the second Test in Antigua.

Dinesh Chandimal on 34 and Dhananjaya de Silva on 23 will resume today’s third day as the visitor’s trail by 218 runs with seven wickets in hand.

The docile Day Two pitch meant that the home side had to work hard for the three wickets they have picked up so far.

It was Alzarri Joseph who would get the first breakthrough when he had captain Dimuth Karunaratne brilliantly caught in the slip by Nkrumah Bonner for one, with just 18 runs on the board.

Lahiru Thirimanne’s appetite for runs against the Windies attack continued as he and Oshada Fernando added 46 runs for the second wicket before Fernando fell just after tea, lbw to Kyle Mayers for 18.

Thirimanne got his third consecutive half-century in the series, but when on 55, he was bowled for the third time in the series. This time it was Kemar Roach who got the job done to leave the visitors in a spot of bother at 77 for three.

In came De Silva to join Chandimal, and the pair batted resolutely to take the visitors to the close without further loss,while sharing in an unbroken 59 runs partnership.

Earlier, the West Indies added a further 67 runs in the first session of the day after resuming the day on 287 for seven.

Captain Kraigg Brathwaite, who was not out on 99, took just two balls to get to his ninth Test century.

The right-hander along with Rahkeem Cornwall took the score past the 300 mark, but with the score on 325, Cornwall, who had earlier brought up his second half century in Test cricket, fell to Suranga Lakmal for 73.

Kemar Roach made nine before he handed the fifth catch to wicket-keeper Niroshan Dickwella off Dushmantha Chameera, who also claimed the final wicket of Brathwaite, who was bowled for a well-played 126, which included 13 fours.

Lakmal finished with four for 94, while Chameera bagged three for 69 for Sri Lanka.