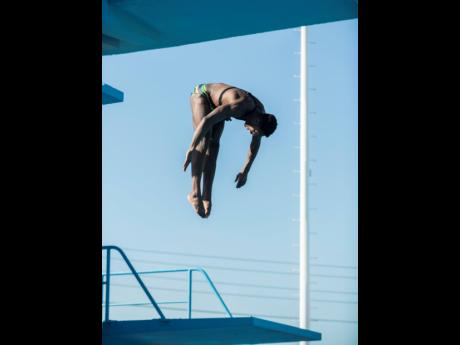 Ahead of his rescheduled Olympic qualifier later this month, diver Yona Knight-Wisdom finished sixth in the 3m springboard open final on the first day of the Virtual Nations Challenge yesterday.

Knight-Wisdom, 25, having advanced to yesterday's final by qualifying in the top six in the preliminary round, finished with an overall score of 365.80 points. Among the six rounds, his highest dive was 78.20 points, which he accumulated on his final attempt. James Heatly of Great Britain finished first with 432.15 points while his teammate Jack Laugher came second with 417.50 points. Thomas Ciprick of Canada placed third with 408.30 points.

The event, which was put on by Diving Plongeon Canada, is the first web-based competition as 37 athletes from four nations took, part virtually in three locations. The competition took place in facilities in England, Canada, and Scotland, where Knight-Wisdom is based.

The completion is Knight-Wisdom's first in over a year as the COVID-19 pandemic caused the postponement of the Olympic Games and subsequently all qualifying events last year. Since March 2020, his preparations were reduced to in-house ground training as aquatic centres in Scotland were closed for months because of COVID-19 restrictions. The two-day event served as part of his preparations for the upcoming Diving World Cup which starts on April 18 in Japan, which serves as an Olympic qualifying event. A maximum of 18 athletes from the World Cup will qualify for the Tokyo Games with the remaining quota being allocated as part of the changes caused by the pandemic.

In an interview on March 17, Knight-Wisdom set a target of 410 points to guarantee a return to the Olympic Games. He qualified for the Rio Olympics in 2016 and took silver in the 1m springboard event at the Pan American Games in Lima, Peru in 2019.