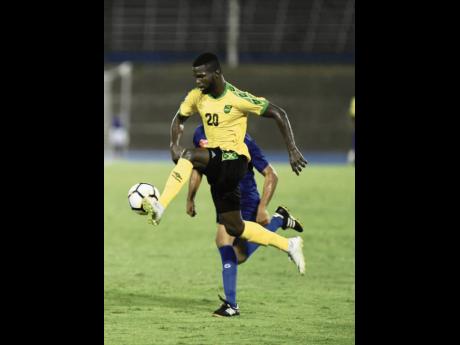 During preparations for his first full season with Belgian club Anderlecht, national defender Kemar Lawrence did not report for pre-season training in May and was absent from the club for four months. In explaining the reasons behind the hiatus,...

During preparations for his first full season with Belgian club Anderlecht, national defender Kemar Lawrence did not report for pre-season training in May and was absent from the club for four months. In explaining the reasons behind the hiatus, the 28-year-old full-back said that he had to return to Jamaica to because of a medical situation with his brother.

Lawrence, who was speaking in a recent YouTube interview with Radio Jamaica journalist Simon Preston, signed for the 34-time Belgian champions in January 2020 after four years with Major League Soccer club New York Red Bulls. He made his club debut on March 7 however that season ended abruptly because of the COVID-19 pandemic. It was reported during that period that Lawrence had lost a family member and was not in any state to play.

"At the time I got transferred to Anderlecht, a month and a half after that, my brother met in an accident and lost a leg," Lawrence shared. "So, during that time, I had to be in Jamaica with him, basically, and just making decisions regarding his health in the hospital and stuff like that."

It was a decision that had the support of Anderlecht and Lawrence says that he is grateful for the support the club has given him during that time. He was subsequently included in the squad that lost to reigning champions Club Brugge on September 4.

"So [Anderlecht] did what they had to do, they supported me, we made it work," Lawrence said. "They wanted me back a bit sooner than I came back, just the way everything was going regarding my brother's health, that's why it took a bit longer than I wanted to."

Lawrence said that his brother is in good spirits and despite logistical challenges caused by the pandemic he is in the process of receiving a prosthetic leg. While it took longer than expected for Lawrence to make his debut for the season, he has made 15 league appearances for Anderlecht since November 1 and has recently been a fixture in the starting line up since the new year for head coach Vincent Kompany. He scored his first goal for the club on February 28 during their 3-1 win over Standard Liege and is contributing to his club's push for the championship playoffs.

Lawrence says that despite the outside challenges, he feels settled into his new environment.

"Once I'm able to go on the pitch and just let loose and have fun, I'm always settled," he said. "Sometimes the stress of the world gets to anybody, [but] when you have a job like mine where you have two hours out of the day to let go and really not think about anything or anybody, just to be yourself, it really helps a lot and it kind of frees your mind from a lot of things that are going on in the world."

Anderlecht are fifth with 49 points, and will hope to take another step towards making the playoffs when they face Antwerp on Monday. The top four teams in the regular season will compete in the Championship playoffs where the league winner will be determined.