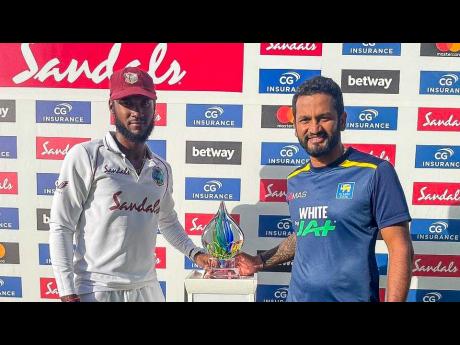 Contributed
West Indies captain Kraigg Brathwaite (left) and his Sri Lankan counterpart Dimuth Karunaratne share the trophy for their two-match Test series that ended in a draw at the Sir Vivian Richards Stadium in North Sound, Antigua on Friday.

It was pitted to be an enthralling fifth and final day with West Indies needing 10 wickets to win the second Test and the series, while the Sri Lankans had to just survive to share the spoils in an evenly contested series.

In the end, the visitors, needing 377 for victory, batted out the day to reach 193 for two in their rain-affected finale.

The home side had all intentions of going in for the kill on the final day, with the visitors resuming on 29 without loss, with Lahiru Thirimanne on 17 and captain Dimuth Karunaratne on 11.

The West Indies had a sniff at an early wicket in the third over of the morning, however, wicket-keeper Joshua Da Silva did not hold on to a leg-side chance offered by Thirimanne off Shannon Gabriel.

That would have been the start the home side would have wanted, however, that snuffed chance saw the visitors cash in and head into lunch on the final day on 93 without loss, with Karunaratne, in the process bringing up his first half-century of the series

After lunch, the pair took the score over the 100 mark, but with the score on 101, Thirimanne, who was on 39, edged an Alzarri Joseph delivery to Rahkeem Cornwall at slip to hand the West Indies their first wicket.

In came Oshada Fernando to join his captain, and the duo continued to frustrate the home side some more, putting on 45 runs for the second wicket, before Karunaratne went leg-before-wicket to Kyle Mayers for 75 at 146 for two.

Fernando never looked troubled thereafter, and he and Dinesh Chandimal added an unbroken 47 run partnership for the third wicket late in the day, before skipper Kraigg Brathwaite decided he had enough.

Fernando was left unbeaten on 66 and Chandimal 10, as the visitors managed to square the series.

For his Herculean effort with the ball, Suranga Lakmal, with his 11 wickets, was named Man Of The Series, with Brathwaite taking the Man Of The Match award.

For Brathwaite, it was a happy outing for his troops over the two-match series.

"I am very happy,” he said. “It was a good pitch for both Test matches. The bowlers worked hard and what was pleasing was that none of the guys gave up. “Yes, we would have liked to have won, but I am really happy with the attitude and discipline we have shown.”

"It's not easy taking wickets in this series,” he said. “Both teams have done well and it was hard work from both teams. I’m happy how we played. Lakmal was good for us and the other seamers too. We need to improve our batting but overall I am happy.”

O Fernando not out 66

D Chandimal not out 10