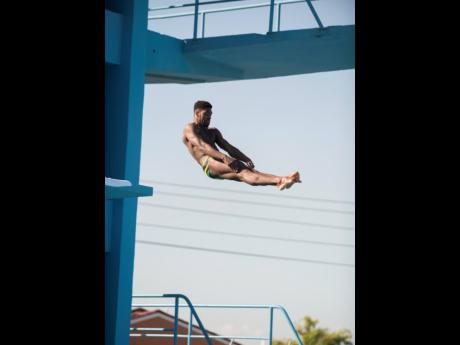 Diver Yona Knight-Wisdom has lamented the cancellation of the Diving World Cup which was scheduled for later this month, which he says has derailed his preparations for the Tokyo Olympics this summer. The Diving World Cup was expected to start on...

Diver Yona Knight-Wisdom has lamented the cancellation of the Diving World Cup which was scheduled for later this month, which he says has derailed his preparations for the Tokyo Olympics this summer.

The Diving World Cup was expected to start on April 18 in Japan and serve as the final Olympic qualifying event, as well as an official test event for the Games. However, the International Swimming Federation (FINA) cancelled the tournament as it was not satisfied with the protocols by local organisers which, in their estimation, "will not properly ensure athletes safety". The World Cup and the Olympics were postponed last year because of the COVID-19 pandemic.

Knight-Wisdom was notified while competing in his first event in over a year on Thursday, and he said that the announcement has now created uncertainty regarding the qualification process.

"Now that throws our plans into disarray," Knight-Wisdom told The Gleaner. "I booked flights out of Tokyo, I booked my COVID-19 test. This was all about getting ready for the World Cup and getting the cobwebs off and ready for competition, and I got that news straight out of the preliminaries.

"I tried to not let it affect me, but it weighed pretty heavily, I think, because it's quite a big thing because it changes a lot of things."

A British Broadcasting Corporation (BBC) report on Friday said that FINA were dissatisfied with the rising cost of COVID-19 countermeasures which it was asked to pay for, and the insistence on a three-day quarantine prior to the event, which would require late changes to pre-booked travel. In a letter obtained by the BBC, FINA said that the uncertainty of being able to protect the athletes through the proposed measures left it no alternative.

"FINA sincerely regrets this situation," the letter read. "Despite all best efforts and understanding from FINA, the Executive was obliged to take this drastic decision."

Knight-Wisdom, who competed in the Virtual Nations Challenge on Thursday, was using the event as a means of preparing for the qualifier. The virtual competition was held in three locations, including Scotland, where he is based. Despite finishing sixth in the 3m springboard final, he said at the time he felt he was in a good place with his preparation for the World Cup. With those plans now altered, he says that he has to await guidance from FINA to determine the next course of action in his road to the Tokyo Games.

"Had the World Cup been going ahead, I would be feeling maybe a little bit down from the fact that I didn't score as well as I wanted to score, but I'd definitely been feeling confident knowing that I was still in a good place, still in a good track with a couple more weeks to improve," Knight-Wisdom said. "But now, all that completely changes. So, we've got to take a couple of steps back, wait for more information from FINA, and see what they plan to do next, really."

The BBC report said that some nations had already indicated their withdrawal from the event and FINA is looking for an alternative location.