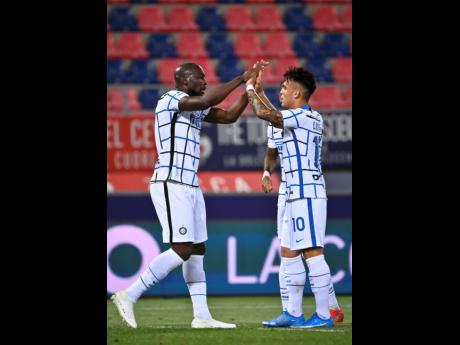 AP
Inter Milan's Romelu Lukaku (left) celebrates with teammate Lautaro Martinez after Lukaku scores the only goal during the Italian Serie A match between Bologna and Inter Milan at the Renato Dall'Ara stadium in Bologna, Italy, yesterday.

Inter Milan's title hopes were given a boost yesterday as the league leaders won and rivals AC Milan and Juventus both dropped points.

Romelu Lukaku set Inter on their way to a 1-0 win at Bologna at the end of a packed day of Serie A football that saw Milan held 1-1 at home by 10-man Sampdoria and Juventus draw 2-2 at Torino in the derby.

Inter moved eight points above second-place Milan, which have also played a match more than their city rivals. Atalanta moved into third, while Juventus slipped to fourth. All 10 Serie A matches took place on the same day due to Easter Sunday.

"They weren't title celebrations after because first we need to win it mathematically," Inter coach Antonio Conte said. "Of course we're seeing it from closer up, others from further away but there is still a long way to go.

"It's inevitable that the closer you get to the end, the more every victory becomes important."

Inter had their last match posptoned due to a coronavirus outbreak but captain Samir Handanović had recovered as had Stefan de Vrij.

Inter took the lead in the 32nd minute with their first real chance. Alessandro Bastoni whipped in a cross from the left and Lukaku's header was brilliantly pushed onto the post by Bologna goalkeeper Nicola Ravaglia but the Inter forward tapped in the rebound.

Lautaro Martínez also hit the post in the second half.

"We took a big step and need to continue down this road," Lukaku said. "It's a great moment for me; I made the right decision coming here. I'll do everything I can to help the team because I'm nobody without my teammates. The group is the most important thing. We have our aim and need to keep this up."

Jens Petter Hauge salvaged a point for Milan three minutes from time and the Rossoneri almost snatched all three points but Franck Kessié's effort came off the post.

Fabio Quagliarella had scored in the 57th minute following a horrendous Milan error. The veteran forward intercepted Theo Hernández's square pass and took one touch before lobbing the ball over Gianluigi Donnarumma from distance.

Samp's good work was undone by an error by one of their own moments later. Adrien Silva was already on a yellow card and he went lunging into Samu Castillejo, so was promptly booked again and sent off.

Milan struggled to carve out genuine scoring opportunities but the equalizer eventually came when Hauge controlled a pass from Kessié before curling into the bottom right corner.

Cristiano Ronaldo rescued a point for Juventus as the pressure grew on coach Andrea Pirlo.

Juventus were eliminated from the Champions League by Porto and surprisingly lost to Benevento before the international break.

"Unfortunately we keep making things hard for ourselves," Pirlo said. "We're suffering these lapses in concentration a bit too often. We must do better."

Juventus play their rearranged match with Napoli on Wednesday with the two sides level on points.

The Bianconeri were without Leonardo Bonucci and Merih Demiral, who contracted the coronavirus on international duty. Weston McKennie, Paulo Dybala and Arthur Melo were also out of the squad after violating coronavirus restrictions with a party at the American midfielder's house.

Federico Chiesa fired Juventus in front in the 13th minute following a one-two with Álvaro Morata.

However, Antonio Sanabria levelled in the 27th and completed the comeback 17 seconds after the break following defensive errors from Juventus.

Torino goalkeeper Salvatore Sirigu pulled off a number of saves but Ronaldo eventually headed in the equalizer 11 minutes from time. The goal was initially disallowed for offside but awarded after a review by the video assistant referee.

Juventus almost snatched a winner moments later but Sirigu managed to fingertip Rodrigo Bentancur's strike onto the base of the upright.