She’s A Wonder bringing too much pace for rivals 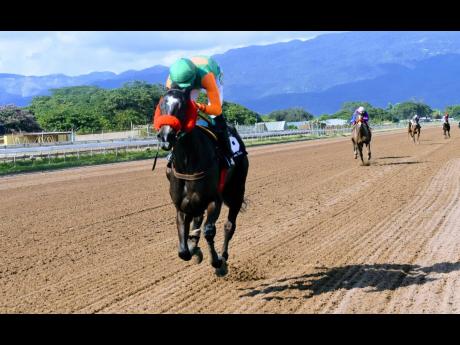 File
Action Ann, pictured here, is one of She’s A Wonder’s main rivals over seven furlongs in the Thornbird Stakes at Caymanas Park in St Catherine on Wednesday.

SHE’S A WONDER’s 59.3, walloping LURE OF LUCY by four lengths on February 6, is the fastest any horse has clocked for five furlongs round this season since the racing surface started running heavy in the second week of January.

The closest any horse has gone this season was ENGLAND’S ROSE, 59.2, but that was on January 2, beating EROY, with the track still lightning-fast before being tempered a month later.

Lining up against her peers in the Thornbird Stakes at seven furlongs tomorrow, the Bern Identity-Jamaican Dream offspring, half-sister to former grade-one winner Boy Wonder (Traditional), has sparkled at exercise, 1:28.3 for seven furlongs, out the mile chute, last Thursday, appearing ready to repeat the form that won her second behind FURTHER AND BEYOND in December’s Jamaica Two-Year-Old Stakes.

After trying to match HOIST THE MAST for speed and coming out the worse in three meetings, blinking first in duels, SHE’S A WONDER tracked her rival in the Jamaica Two-Year-Old Stakes and finally got the desired effect, staying on to finish three lengths behind FURTHER AND BEYOND, beating another colt, DEN STREET, into third place.

It was out of that race that she returned to clock the fastest time at five round on the heavy surface, signalling that her form has held up well for a crack at the fillies’ classic, June’s 1000 Guineas.

Meanwhile, bred-for-speed HOIST THE MAST put in a dour performance on her seasonal debut, finishing 14 lengths behind four-year-old colt, LABAN, at six furlongs, carrying a featherweight 109lb. The benefit of the doubt, a near three-month lay-up, was erased last Friday when HOIST THE MAST went a full three seconds slower than SHE’S A WONDER’s workout the previous morning.

With who should have been her main rival looking spotty out of her last race and at exercise, SHE’S A WONDER, who is even three pounds lighter than HOIST THE MAST, should use her class and speed to overcome Hot Line Stakes winner, ACTION ANN.

Quickening in deep stretch to tag second-time-out SECRET IDENTITY, ACTION ANN faces her sternest test, sitting level with SHE’S A WONDER, who distinguished herself in the biggest two-year-old race of last season.

ACTION ANN’s 1:14.3 for six furlongs was a fair effort, but matching strides with SHE’S A WONDER is a big step up from chasing SURE CURLIN and SECRET IDENTITY, who she only managed to beat by a neck.

Obviously pleased with Reyan Lewis’ handling in the Jamaica Two-Year-Old Stakes, Ian Parsard has chosen him ahead of Dane Dawkins for the Thornbird Stakes, which should be an easier assignment with the colts and geldings out of the way.