Waterhouse, Portmore forced to pull out of regional tournament 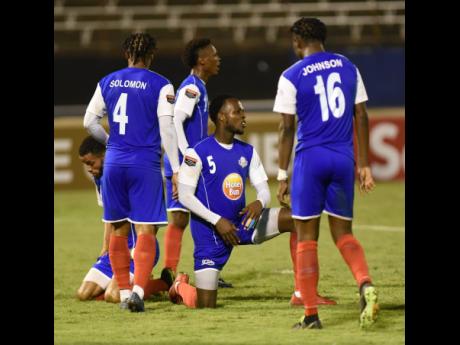 Waterhouse FC and Portmore United, Jamaica's two representatives in the 2021 Flow Concacaf Caribbean Club Championships, scheduled for the Dominica Republic from May 16-26, have taken the decision to not participate in the tournament due to lack of preparation and competitive activity.

According to a Professional Football Jamaica Limited (PFJL) press release, the clubs indicated that as a result of the COVID-19 pandemic, which has led to the indefinite suspension of the Jamaica Premier League, they have been unable to participate in any local football competition.

It noted also that clubs have not had the benefit of consistent training, based on changes in the Disaster Risk Management Act, since late January.

"The Jamaica Football Federation (JFF) and the Professional Football Jamaica Limited (PFJL) have persisted in their numerous efforts to secure government approval for training and competition for the Jamaica Premier League," the release read.

"Jamaica’s only professional sports league is yet to begin. The PFJL is currently pursuing the possibility of a league in a controlled environment, which even if approved, would not be likely to begin ahead of the FLOW Concacaf Caribbean Club Championships.

"Therefore, as our teams have been inactive for more than a year and with the FCCC weeks away, regrettably, Waterhouse FC and Portmore were left with no option other than to withdraw from this year's tournament," it said.

PFJL chairman, Christopher Williams, said that the decision by the clubs saddens the PFJL, but that they support the decision.

"PFJL remain 100% in support of their decision given the circumstances that have occasioned their pulling out of the most important regional tournament that has realised much success for many of our clubs in years past.

"It is also inescapable for me not to point to the fact that this is the first of many dominoes that will befall the sport and our players locally, if we are not able to restart the Jamaica Premier League before the end of the 2021 season," he added.

Waterhouse FC president, Donovan White, said the decision is extremely unfortunate and a painful one because they earned the right and really wished they could participate.

"The combination of no return to play yet for football from the government, has stifled our ability to generate an income and has left us financially unable to make the huge commitments required to participate," he stated.

“The decision to withdraw from the Flow Concacaf Caribbean Club Championship was most difficult and painful. Our players in particular look forward to these international platforms to showcase their talents. It has proven very successful over the years in providing a pathway to the international club market," he said.

"Unfortunately, we have not been able to train and play for over a year due to the pandemic. We’re devastated by this decision but we have to be prudent. We cannot compete in any competition without proper preparation, let alone, a regional tournament against teams that have been in active competition," he said.

The winner of Caribbean Club Championship qualifies automatically for the Concacaf Champions League, while second and third advance to the Concacaf League.