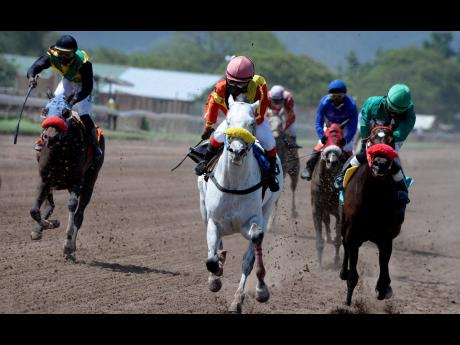 File
Natalie Berger (centre), aboard PaintThisTownRed, on her way to victory at Caymanas Park on Saturday, April 20, 2019.

After the recent announcement by Supreme Ventures Racing and Entertainment that it will be awarding $100,000 to the female jockey with the most wins at the end of the quarter, Natalie Berger has signalled her intentions after her first win of the season on Wednesday.

Berger, 28, has been riding for over six years. She piloted ROYAL AVIATOR for trainer Nicholas Smith in the first race at Caymanas Park.

“It is a great feeling because it is a long overdue win for me and I was overwhelmed for this win,” she said.

“I have to give thanks to the trainer and the groom, and I am hoping and praying that things will get better from here on for me because I need to win this money.

"My aim is to get the winning rides right now because everyone wants to win this money and it is also great for us female jockeys as this will give us more recognition.”

“People will be looking out for us more and they are also expecting us to work a lot harder because we know that as female jockeys, we can ride and once we get the good rides, then we will win races,” Berger said. “We are going to put in a lot of effort because we are competing against the males and that extra effort is always needed whether it is on the exercise track in the mornings, or on race days.

“I hoping that this one will lead to a lot more because once you win a race, then it will give you more confidence to go on to win more.”

Berger, who has 20 career wins, is among five female jockeys now at Caymanas Park. The others are Samantha Fletcher, Abigail Able, Andree Powell, and Mellisa Ward.