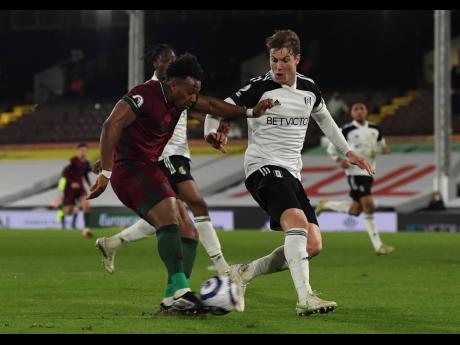 Adama Traore smashed home a brilliant finish from an acute angle in the second minute of stoppage time for Wolverhampton to beat Fulham 1-0 on Friday, further damaging the home team's hopes of escaping relegation from the English Premier League (EPL).

The Spain winger was sent clear down the right and his blistering effort from just inside the area beat Fulham goalkeeper Alphonse Areola at the near post for his first goal since December 2019.

Fulham could have climbed out of the relegation zone on goal difference, at the expense of Newcastle, with a win at Craven Cottage but barely created a clear-cut chance and slumped to a fourth straight loss.

Scott Parker's side stayed in third-to-last place with six games remaining, two fewer than Newcastle, and have now wasted three chances to get out of the bottom three for the first time since December.

Wolves looked to have taken the lead on the stroke of halftime when Willian Jose headed home from Daniel Podence's cross from the right, but VAR spotted the most marginal offside against Podence.

Wolves jumped to 12th place and are 12 points above Fulham.