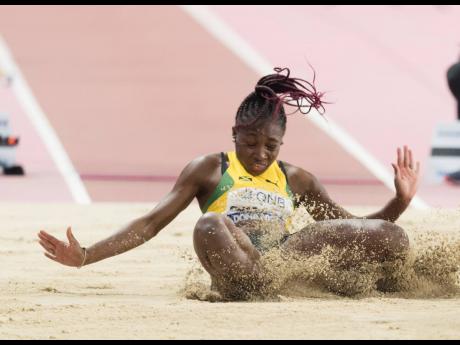 Long jumper Chanice Porter was delighted to get a personal best in her first outdoor meet of the season on Friday. However, she limped out of the pit at the Spec Towns Invitational in Athens, Georgia, with an ankle niggle that has her concerned.

Porter added 2cm to her lifetime best of 6.75cm with a strong first-round jump. It was a signal that she had recovered from a recent bout with COVID-19.

“I was just grateful for the distance because, going into the meet, I didn’t know what to expect,” she said. “A week before the meet, practice wasn’t really going so well because I got COVID, and recovering from COVID wasn’t easy because I lost my speed. I just lost everything.

Those troubles left her unsure about her form.

“The week before, it was just hard for me to get any jumps that were like good enough to say, okay, I know I’m going to do well.”

But trouble was lurking nearby.

“It’s just a constant battle with my ankle every week,” Porter lamented. “After the second-round jump, I jammed it really hard and that’s why I passed on the third one, trying to see if I could get my ankle a little bit rested.

“But it just never got rested or recovered for me to jump any further.”

Now her priority is getting her ankle back fully fit.

“I have to get that sorted out first because it’s putting a strain on my nerve that connects it to my knee, and it’s just giving me this weird sensation all along that area... from my knee to my ankle,” she said.

Having missed all of 2017 with injury, the 2016 NCAA champion isn’t taking any chances.

Porter was a finalist at the 2019 World Athletics Championships and also the 2011 World Under-18 long jump champion.