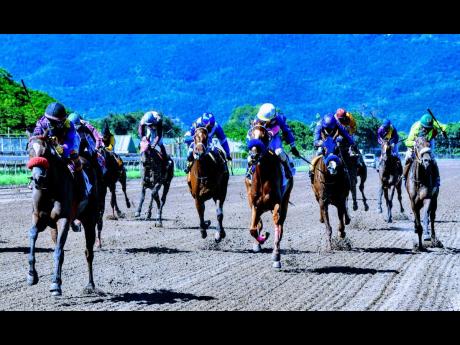 Gary Subratie’s importer, AWESOME TREASURE, appears the horse to beat, on paper, in the Aston Commock Memorial tomorrow at a mile but Ian Parsard’s in-form and improved DEJAE’S BOY has a score to settle after his February 13 attempt to shock rivals at 16-1.

A transformed horse since Parsard removed the blinkers in a half-length loss to VOYTEK at five furlongs round, DEJAE’S BOY immediately started showing signs that he wanted a longer distance, closing fast behind EXCESSIVE FORCE at six furlongs on December 13 before easily dispatching ROSES FOR ELEE at a mile on January 31.

It was out of that seemingly innocent victory that DEJAE’S BOY returned on February 13 to produce a rail-hugging run into the lane, making a bid at long-time leader LET HIM FLY, before BATTLE DANCER bore down on him, leaving the furlong pole, causing Anthony Thomas to snatch up his mount, eventually finishing fourth.

AWESOME TREASURE, highly fancied at 6-5, had moved as a team with DEJAE’S BOY from three furlongs out but went a bit wide with Dane Nelson off the turn. Charging at rivals inside the last furlong, AWESOME TREASURE had to settle for third but only a length ahead of hindered DEJAE’S BOY, who was actually rallying late to reduce the margin after being hindered.

Both AWESOME TREASURE and DEJAE’S BOY have won since. DEJAE’S BOY put RUM WITH ME in his place at seven furlongs last Wednesday, clocking 1:27.3. AWESOME TREASURE outclassed ALEXA’S LODGE at six furlongs on March 7 before returning with an eye-catching second behind out-of-class repeat winner, ONEOFAKIND, six days later.

Drawn at post-position three, DEJAE’S BOY should get his preferred rail run with Omar Walker while Dane Nelson will be circling rivals from stall six with AWESOME TREASURE, who the handicaps favour in the rematch, should it come down to a stretch battle.

AWESOME TREASURE has a tendency to break slow but so, too, does DEJAE’S BOY, making it a tough call, which could be decided by who has the better luck in running. It’s one of those races in which there is no need to play hero, especially with the possibility of EXCESSIVE FORCE rebounding to form.

Philip Feanny’s importee, EXCESSIVE FORCE, who performed better in the visor behind KING ARTHUR’s fast-time win at five furlongs straight last Thursday, joins the fray with a big seven-length win over AWESOME TREASURE on her résumé from January 23, suggesting that she could turn the race into a mockery if that form is reproduced.

However, Feanny’s foreigner remains suspect despite closing into third behind KING ARTHUR. The previously heavy track, especially the straight course, was made fast with last week’s rain, aided by a collapsing pace, set in a following wind, by BASILICUS. Note how COLD PURSUIT closed into third place.