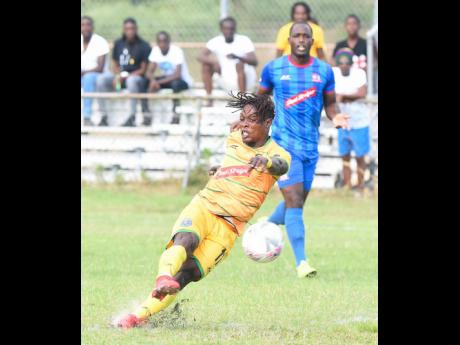 File
Vere United’s Nerado Brown in action against Dunbeholden during a Premier League game at the Wembley Centre of Excellence in Hayes, Clarendon, on Sunday, February 16, 2020.

General Manager Arlene Martin is now hopeful that Professional Football Jamaica Limited (PFJL) will receive a positive outcome regarding the approval from the Government for the start of the Jamaica Premier League this season. Martin told The...

General Manager Arlene Martin is now hopeful that Professional Football Jamaica Limited (PFJL) will receive a positive outcome regarding the approval from the Government for the start of the Jamaica Premier League this season.

Martin told The Gleaner that the PFJL has resubmitted all its protocols the Ministries of Health and Wellness, and Sport, and is now awaiting their response. She said that she is optimistic that the recent vaccination of thousands of Jamaicans could mean a favourable response.

“It has given us a lot more hope, because with the numbers that we had in January, the Government decided that they would allow sporting events to take place conditionally in February,” she said. “Then the numbers started going up, and the numbers are now going back down, so we are hoping that the Government is again at that position where they were in January when they gave the go ahead in February.

“I am hoping that we will hear something on Tuesday next week. We are optimistic that it will be a positive response, and that is why we have been working so hard these months.”

Jamaica has recorded over 43,000 COVID-19 cases and almost 700 deaths. There has been no domestic football played since March 2020, after last season’s competitions were ruled null and void by the Jamaica Football Federation.

“We have not given up hope, and we are optimistic that we have designed protocols that will protect the lives of players and everybody involved,” Martin said.

“We are optimistic that we have gotten to a phase, and that the country is also at a place where they are a little more comfortable in terms of what is happening. A number of additional persons have been vaccinated, so what we are hoping is that the Government is more comfortable to give the okay.”