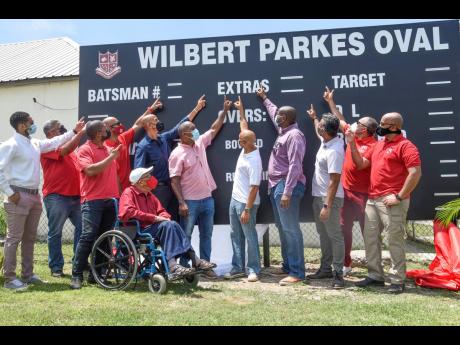 The Wilbert Parkes Oval, as it is now named, commemorates Parkes’ nearly 50 years of service to the school.

Parkes led Campion College to their first senior cricket title, the ISSA Sunlight Cup (now the ISSA Grace shield) in 1987, and followed that up with titles in 1989 and 2015. He was lauded by former players and school administrators for not only his contribution to the development of the school’s cricket programme, but for the role he played in building the character and discipline of those under his tutelage.

“I am elated,” Parkes told the gathering at the field. “This has brought tears to my eyes. I am so elated.

“Thanks to everyone. I appreciate the fact that you appreciate what I’ve done for you. So many people would have said I have done so many things for them, but I did it all from the heart.

“The lessons you learn are lessons you use in every aspect of your life,” Robinson said. “Lessons of discipline, focus and teamwork. All the things he taught me, I have used in my life.

“I am proud to have played cricket under Mr Parkes and I want to thank him for what he has done for us, and for cricket at Campion College.

WILL BE LASTING LEGACY

“It (Wilbert Parkes Oval) will be a lasting Legacy. There will be generations of students that will not know who Mr Parkes is, they will not know the history and his contribution, but it is important that they understand this.”

Principal Grace Baston said Parkes leaves what she describes as a rich legacy in cricket and character development at the institution, and that having the oval named after him was only fitting.

“I think it is important to immortalise and honour the architects of our school, people who are responsible for shaping the wonderful reputation that the school enjoys,” she said.

“Apart from his expertise as a cricket coach, it was his care with the formation of our young men. He modelled in them the discipline, decency and gentleman like behaviour that you would want to see in every young man.

“This scoreboard stands here as a legacy for our students to ask ‘who is Wilbert Parkes’ and for his story to be told.”