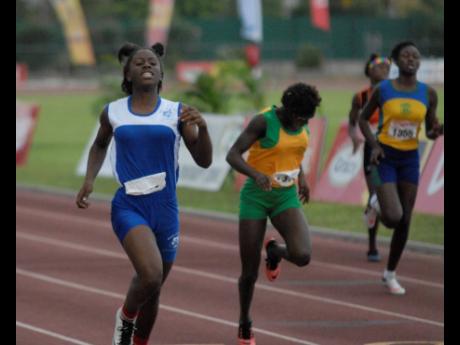 THE PURPLE patch on the collegiate circuit in the sprints continued at the weekend for former Mount Alvernia High School athlete Kemba Nelson. Competing for University of Oregon, Nelson, the surprise winner of the women’s 60m at the National Indoor Championships, was at her best in the 100m and 200m at the West Coast Classics in Arizona on Saturday.

She first clocked a personal best of 11.18 seconds to win the women’s 100m, improving on her previous best, 11.49 seconds, to finish ahead of teammate Jasmin Reed, who was second in 11.48s. She returned later for another lifetime best of 23.03s for second place in the women’s 200m, to winner Shae Anderson of University of California, Los Angeles, who finished in 22.96s.

There were also a good result on the day for former Jamaica College jumper Clayton Brown at the Tom Jones Memorial Meet at the University of Florida. Competing at home, Brown captured the men’s high jump after clearing the bar at 2.21m. He finished second in the men’s triple jump with 16.16m, just beaten by Christian Taylor of the United States, who won with a jump of 16.19m.

Former Hydel High School and national representative Shadae Lawrence was also a winner at the meet after taking the women’s discus throw with a distance of 57.86m.

Former St Andrew Technical High School jumper Taishia Pryce picked up a win with a distance of 6.14m in the women’s long jump at the Michael Johnson Invitational in Waco, Texas.

Her teammate Rhianna Phipps, formerly of Hydel, was second in the women’s triple jump with a mark of 13.19m.