Chelsea preparing to ask out of Super League 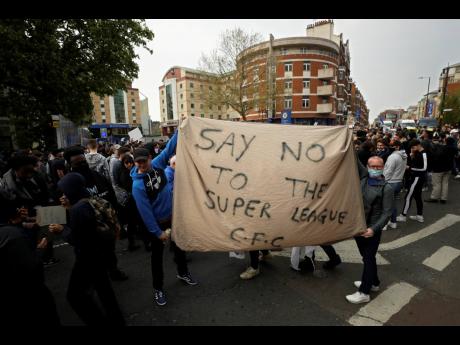 AP
Chelsea fans protest outside Stamford Bridge stadium in London, against Chelsea's decision to be included amongst the clubs attempting to form a new European Super League, Tuesday, April 20, 2021. Reaction to the proposals from 12 clubs to rip up European soccer by forming a breakaway Super League has ranged from anger and condemnation to humour and sarcasm.

A person with knowledge of the decision tells The Associated Press that Chelsea are preparing to tell the Super League it wants out of the plan to form a breakaway competition.

The person spoke on condition of anonymity because Chelsea was yet to send their decision to the organisers of the new largely closed competition that would split the teams away from UEFA's existing Champions League.

The decision came as fans protested outside the club's Stamford Bridge stadium.

Chelsea were one of six English clubs along with three elite teams from both Spain and Italy who signed up to the Super League.

English opposition to the Super League intensified on Tuesday when the Premier League threatened to sanction the six rebel clubs and Prime Minister Boris Johnson considered introducing laws to stop them forming a new European competition he called a "cartel."

Divisions within the Super League clubs also grew with Manchester City manager Pep Guardiola saying joining a largely closed competition away from UEFA's existing Champions League could damage the integrity and values of sport. Liverpool manager Jürgen Klopp has also expressed concerns about the actions of his club's owners while fans of Chelsea protested on Tuesday against their leadership outside Stamford Bridge.

The Premier League has already threatened the six Super League clubs with expulsion if they go it alone in Europe. The other 14 clubs met on Tuesday and "unanimously and vigorously" rejected the Super League plans.