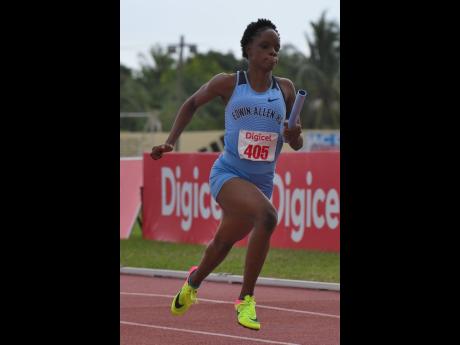 Edwin Allen High School and St Jago High School continued their dominance at the Central Athletics Championships as both teams retained their Girls and Boys’ titles in convincing fashion yesterday.

Edwin head coach Michael Dyke recently told The Gleaner of concerns he had with his team’s sharpness because of inactivity, but there was little sign of this as they displayed good all-round performances and showed that it will take something extra special from any of their rivals to dethrone them at the ISSA/GraceKennedy Boys and Girls’ Athletics Championships (Champs) next month.

All teams came out with their best as they sought automatic qualifying spots for Champs as the top two in the sprint events gained berths.

Following her 1500m win on the opening day, Edwin’s Rhianna Gayle scored a double at the meet as she returned to win the Class Three 800m yesterday after clocking 2:11.79 minutes, getting the better of St Catherine High School’s Kitania Headley, who was second in 2:13.61 minutes, and Holmwood Technical’s Cindy Rose, who was third in 2:17.73 minutes.

Shaiquan Dunn led the way for Jago Boys after winning the Class Two shot put with a heave of 17.30m. St Catherine’s Rajay Hemmings was second with 14.57m.

The defending champions dominated the sprint hurdle events, winning two out of three as Akeem Richards won the Class Three 100m hurdles in 14.05s, ahead of Clarendon College’s Otis Bennett, second in 14.86m, while in the Class Two 110m, Jago did the one-two as Demario Prince (13.97s) won ahead of teammate Andre Harris, who was second in 14.01s.

Edwin’s Christopher Young was in record-breaking form at the meet. He won the javelin throw with a distance of 61.60m to better the record of 61.10m set last year. Earlier, he was surprised in the Class One discus throw as he had to settle for second with a distance of 56.29m as Clarendon’s Brandon Lloyd of Clarendon College won with a mark of 60.28m.