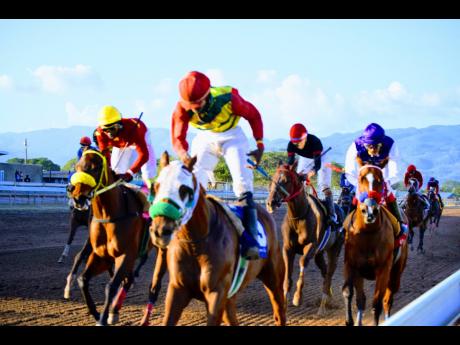 TOONA CILIATA’s acceleration in last month’s Chairman’s Trophy, splits of 58.3 and 1:11.0, coming out of an opening quarter of 23.4, the first three furlongs in 35.0, a move that crippled rivals, confirmed him as the country’s top-rated runner, making him the horse to beat in this afternoon’s Viceroy Trophy at a mile.

In the Chairman’s Trophy, TOONA CILIATA appeared to have had the daunting task of reversing eight lengths on NIPSTER, following his Boxing Day third-place finish behind the Horse of the Year at eight and a half furlongs.

What made it even more difficult to have tossed the eight lengths as an off-day for TOONA CILIATA was the fact that then three-year-old NIPSTER had also beaten him out of sight in their previous meeting, second past the post behind disqualified SIR ALTON at seven and a half furlongs on November 28.

However, as the Queen Mother said, following Devon Loch’s fall after clearing the final fence of the 1956 Grand National, ‘That’s racing, I suppose.”

It turned out that TOONA CILIATA’s Chairman’s Trophy victory, humbling NIPSTER, proved that both his November and December efforts should have been thrown out, one too bad to be true and the other him still not being at his best a month later.

Partnered by Dane Nelson in the Chairman’s Trophy, five-year-old TOONA CILIATA effortlessly left a ridden SUPERLUMINAL standing, approaching the three-furlong marker, to cruise into the lane, with ROY ROGERS chasing in vain and NIPSTER hard ridden to improve into third.

Having practically set his own fractions the entire trip, hitting the furlong pole in 1:24.3 for seven, Nelson was basically showboating when Anthony Thomas came calling astride SENTIENT.

A case can be made for NIPSTER, who had faced TOONA CILIATA with a 14lb weight swing against him, allowing the top handicapper five pounds, after being in receipt of nine when beating him on Boxing Day. It could also be argued that NIPSTER was making his first outing for Anthony Nunes, running as a new stablemate of TOONA CILIATA, who the trainer already knew inside-out and had prepared with the Chairman’s Trophy in mind.

However, NIPSTER, who normally produces a searing stretch run to pounce on used-up rivals, got his first real taste of consistent pace in the Chairman’s Trophy and was too tired to make an impression in the straight, surrendering the chase to SENTIENT.

The handicapper has done NIPSTER no justice, rated at 126lb with TOONA CILIATA, who will go down to 117lb with strong claiming rider, Romario Spencer, technically an 18lb swing in his favour out of their Boxing Day meeting.