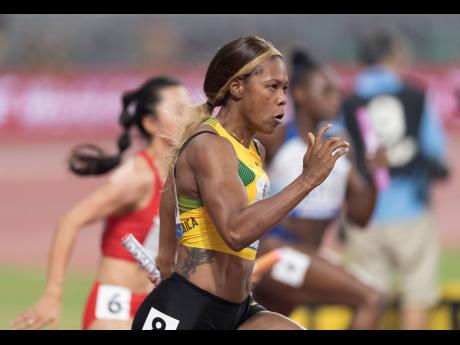 It was a busy day for Jamaica's senior athletes in the United States on Saturday, with several of them registering impressive results at the Oregon Relays in Eugene, Oregon and the Tru Fit Athletics Sprint Classic in Miami, Florida.

Natasha Morrison and Brittany Anderson produced personal best performances with the former getting a victory and the latter finishing second in their respective events, with their compatriots securing several top three finishes at both meets.

The best performance on the day from a Jamaican perspective came from Morrison in Florida, with the MVP sprinter becoming the first Jamaican female to go sub-11 seconds in the 100 metres this season, after stopping the clock at 10.87 seconds.

Morrison, a part of Jamaica's 4x100 metres relay team at the Doha World Championships in 2019, is now the number two ranked female in the event this season, behind Sha'Carri Richardson of the United States, who won at the Miramar meet in Florida two weeks ago in 10.72 seconds.

In Eugene, Anderson, the former World Youth Under-18 champion, also showed fantastic form in a strong field in the women's 100 metres hurdles.

Anderson ran a clean race throughout, to finish second in 12.82 seconds to become the top Jamaican in the event so far this season and number nine in the world. Fellow Jamaican Rushelle Burton finished ninth in the event in 13.79 seconds, as world leader Jasmine Camacho-Quinn of Puerto Rico, won in 12.46 seconds.

Outside of Anderson and Christopher Taylor on the track, who was third in the men's 200 metres in 20.73 seconds, the Jamaicans found the going very rough on the track in Oregon.

However, there were three second place finishes in field events at the meet.

Both Kemba Nelson and Christania Williams were finalist in the women's 100 metres, which was won by Blessing Okagabere of Nigeria in a season best 10.97 seconds.

Competing at home at the University of Oregon, Nelson, who was the second fastest qualifier, after winning her heat in a wind-aided 11.08 seconds, failed to fire in the final, finishing fifth in 11.22 seconds, as Williams, who seemed to pick up an injury during the race, finished ninth.

Earlier, Briana Williams failed to advance to the finals, after finishing seventh in her heat with 11.29 seconds.

On the male side, all three Jamaicans failed to make it to the final in the men's 100m, as Tyquendo Tracey was fifth in his heat in 10.45 seconds, while Jermaine Brown and Andre Ewars both ran sixth with 10.61 and 10.63 seconds respectively.