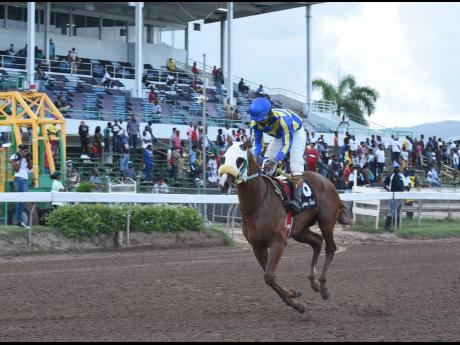 ONEOFAKIND staged a tremendous rally inside the last half-furlong of yesterday’s Viceroy Trophy to outfinish stablemate NIPSTER, completing a hat-trick of wins for a 7-1 upset in his first outing among open allowance/graded stakes runners.

Overshadowed in the betting by stablemates TOONA CILIATA and NIPSTER, in-form ONEOFAKIND made a bid for the lead wide of horses, overtaking Gary Subratie’s DUKE and SENTIENT leaving the three-furlong marker, to get first run into the lane.

NIPSTER, last year’s St Leger winner, quickly went after ONEOFAKIND and overhauled his rival a furlong out, Robert Halledeen seemingly having the race at his mercy.

However, the handicaps took a toll on Horse of the Year NIPSTER, running nine ponds heavier than ONEOFAKIND, who he had only beaten by a length and a half in September’s St Leger.

FOUGHT BACK TO WIN

Responding to joint champion rider Dane Nelson’s rousing ride along the rail, ONEOFAKIND fought back to get his head in front close to home, rallying to win by three-quarter length in 1:39.1 for champion trainer Anthony Nunes.

TOONA CILIATA, who had beaten NIPSTER by eight lengths in last month’s Chairman’s Trophy at seven and a half furlongs, was never better than fifth at any point in the eight-horse field, finishing next-to-last as the 4-5 favourite.

Though Nelson’s bustling ride aboard ONEOFAKIND brought the house down, his rival, co-champion, Anthony Thomas, stole the day, booting home a four-timer to grab a one-win lead atop the jockeys’ table.

Thomas rode two winners for Jason DaCosta, IANNAI LINKS and SILENT SEEKER, in the second and eighth races, respectively. Victories aboard DEE DANGER and SENCITY, fourth and sixth races, respectively, handed Thomas a half of the day’s eight races, pushing him to 32 winners in the jockeys’ standings.

Racing continues this morning with an early 9:15 start to beat the COVID-19 curfew close-off time of 4 p.m.