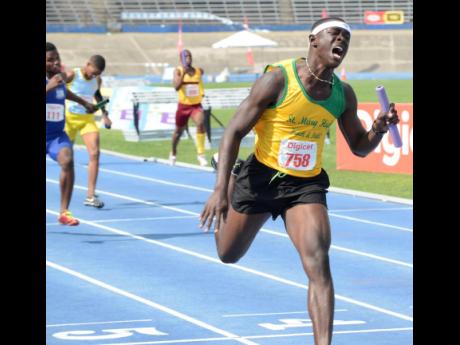 File
Giovanni Purser anchors St Mary High School to victory in the Class One Boys 4x100m relay final at the Eastern Athletics Championships on at the National Stadium in Kingston on Tuesday, March 5, 2019.

The meet, which was postponed for three weeks, will see the top two athletes in the sprints getting automatic selection for Champs.

St Mary High School girls’ team head coach Dwayne Williams is confident that his team will retain its title despite taking a squad of only 24 girls this year instead of the usual 40 to 50 athletes.

We are very confident of victory once again despite a small group of girls going to the Championships as it is a quality one,” he said.

After a close victory over St Mary to win the Boys’ title last year, Buff Bay High School head coach Kevin Brown does not have championships honour on his agenda.

“It will be very difficult for us to retain the title as we are only taking 10 athletes to the Championships,” he said. “The objective is to ensure that these athletes, who are in their final year, qualify for Champs and do well so that they can get scholarships to tertiary institutions.”

Brown says that it was difficult preparing his team this year as the COVID-19 pandemic resulted in little or no activity taking place at school.