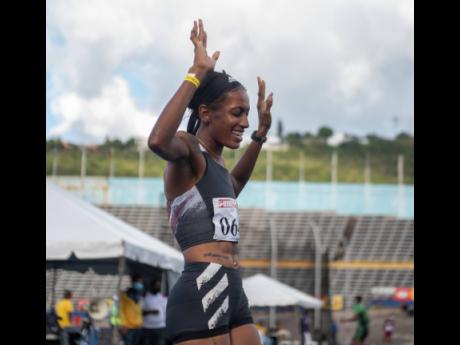 Gladstone Taylor
Ronda Whyte celebrates after winning her heat in the women’s 400m event at the Jamaica Athletics Administrative Association Qualification Trials 3.6, held at the National Stadium in Kingston on Saturday, March 13.

Local-based 400m hurdler Ronda Whyte has been enjoying an impressive start to the season, despite the COVID-19-forced lockdown restrictions currently being enforced in the island.

Whyte, who, like most athletes in and outside of Jamaica, has been significantly affected by the lack of regular competitions and the overall disruptions to her preparations, has shown little sign of rust, having produced a personal best of 23.20 and 51.28 seconds to win the 200m and 400m at two recent Velocity Fest and Jamaica Athletics Administrative Association qualifying meets.

The 30-year-old Whyte, who was a surprise winner of the women’s 400m hurdles at the National Senior Championships in 2017, when she upstaged the likes of Ristananna Tracey, Janieve Russell, Leah Nugent and Kaliese Spencer, is looking forward to a big season and is hoping to do enough to make her first Olympic team, following her 2019 World Championships debut in Doha, Qatar.

Whyte failed to progress beyond the first round in Qatar, finishing sixth in her heat.

“First, I must give God thanks as without Him, I would not have been doing what I am presently doing,” Whyte told The Gleaner.

“The pandemic has been a blessing for me, as my coach was able to spend more quality time working on my weak areas in training and everything is coming to perfection,” added Whyte.

The athlete also pointed to off-the-track adjustments, which she believes have contributed to her approach and early season success on the track.

“There have also been some personal changes in my life and this has helped me to have a more positive outlook on things. It has helped me to be more focused and I am now more matured, and I just want to remain healthy and be consistent,” Whyte shared.

After her breakout year in 2017, Whyte has failed to match that performance on the international stage, and she believes that this is because of nervousness, having not competed under pressure during her years as a junior athlete.

“I never had an experience at Boys and Girls’ Championships like my other colleagues, and that mental toughness was not inside of me. Now with the new change in my personal life, it has helped me to maintain my mental focus and I will not be rushing to do the 400 metres hurdles,” she stated. “Back then, I didn’t have a purpose, I was never serious about the event as I only did it to please myself.”