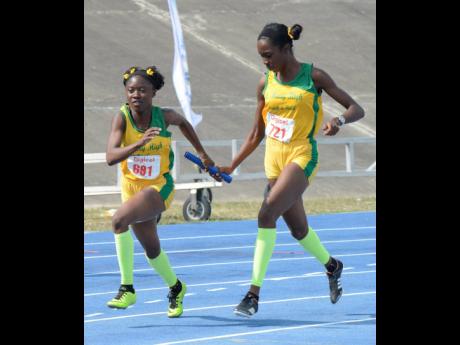 File
St Mary High school’s Keresa Richardson (right) passes the baton to teammate Janelia Campbell during the Class One girls 4x100m final at the Eastern Athletics Championships at the National Stadium in 2019.

St Mary took top honours at a closely contested Eastern Athletics Championships at the National Stadium yesterday, after successfully defending their female title, to dominate the meet with 403.5 overall points, just nine more than second-place Titchfield, which finished on 394.5 points.

The championships is the penultimate Regional Qualifying Regional meet ahead of next month’s truncated ISSA/GraceKennedy Boys and Girls’ Athletics Championships.

The overall top four was completed by Buff Bay with 355 points and Port Antonio, 327 points.

Jovian Edwards of Oberlin High School and Alexia Austin of Glengoffe High School were the standout athletes at the meet as both wrote their names in the record books.

Edwards, with a throw of 53.20m, won the open boys’ javelin event, to erase the one-year-old record of 52.33m, while Austin’s 14.52 seconds in the girls’ Class Two 100m hurdles removed the old mark of 14.74 seconds, which done by Felecia Fearon of Morant Bay High at the last championships.

St Mary High made their intention of retaining their title clear from the onset, after dominating the 1500m. They had three winners here, led by the outstanding Shone Walters in Class Two, the record holder in the event, who easily won in 4:57.32. Tanoya Williams, 6:19.40, and Latoya Hall, 6:22.68, also won in Class Three and Class One for the champions.

Both Walters and Hall were two of five double winners on the day for St Mary High with the former also winning the Class Two 800m in 2:20.55 while Hall took the Class One event in 2:44.09.

“I am elated with the win, but I was expecting a more competitive championships as most of the teams had the same amount of athletes competing due to the COVID-19 pandemic. However, hats off to my girls, as each of them stepped up to the plate and were determined to defend their title successfully,” said Williams.

After his team’s first-ever success at these championships, head coach of Port Antonio High School, Kerith Graham, who is in his fourth year at the helm of the programme, stated that it wasn’t about winning, but bringing a new culture to the school programme.

“Coming into the championships, the focus wasn’t on winning, but to bring a new competitive culture to the programme. I am happy for the kids, as this is a new programme and we are trying to take it step by step,” Graham stated.

Other top performances for the new champions came from Andrae Simpson, who won the Class Three 400m in 55.07 seconds, Wayne McGregor who topped the Class One 400m in 49.80 seconds ahead of teammate Najay Campbell, 51.22 seconds and Jahmoni Smith, who was first in the Class Two 200m in 22.59 seconds.