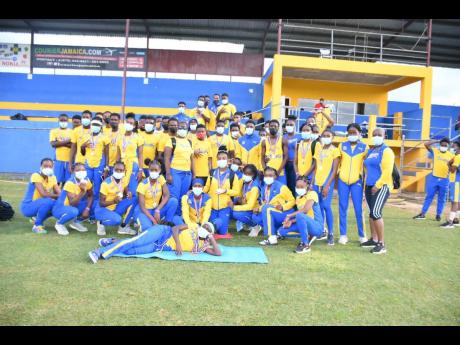 STETHS’ head coach, Reynaldo Walcott, said he is proud of his team’s performance as they look forward to the ISSA/GraceKennedy Boys and Girls’ Athletics Championships (Champs). He said that he was surprised by their three record-breaking performances on the day.

“We definitely had a good Championships that we were grateful for,” Walcott said. “It’s promising, but [national] Champs is not the same as Western Champs. I’m looking for my athletes to do well. It’s going to be tough,, but I know it will draw out the best in us.

“I didn’t expect any records on the grass, but the surface here is really good, to be honest, and well prepared. I guess competition does drive improvement, so the competition in the west pushed my athletes to the records.”

Rusea’s head coach Roderick Myles, who gracefully surrendered their four-year hold on the girls’ title, was pleased with some outstanding individual performances from his squad, which missed a number of personnel.

“I think the athletes are coming into their own,” Myles said. “We got a number of personal bests today, and to see that going into Champs in less than two weeks, I am happy.”