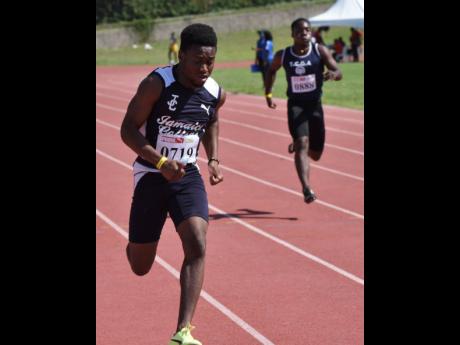 Excelsior High School quarter-miler Devontie Archer warmed up for the upcoming ISSA/GraceKennedy Boys and Girls’ Athletics Championships (Champs) with a fine double at the Jamaica Athletics Administrative Association Last Chance Meet at the National Stadium with wins in the Class One 400m and 400m hurdles events yesterday.

Archer, one of the favourites to take the intermediate hurdle event at Champs, and one of three athletes to have gone sub-52 seconds in the event this season, came face to face with Kingston College’s (KC) Rayon Campbell, the fastest in the event so far this season, and who had beaten him at the Corporate Area Championships four weeks ago.

But Campbell did not finish the race after falling at the third barrier as Archer looked quite easy in clocking 51.66 seconds for an impressive win as the Jamaica College (JC) duo of Roburn Walker (54.26s) and Jahiem Jaddoo (54.74s) ended second and third, respectively.

CLOSED OUT IN FINE STYLE

Archer closed out his double success in fine style after winning his heat of the one-lap event in 46.90s for the fastest time overall, getting the better of KC’s Shaemar Uter, as the former Wolmer’s Boys’ athlete clocked a season’s best 47.03s for second while JC’s Javier Brown (47.38s) ended third overall.

KC showed their strength in the hurdle events after a podium finish in the Class Two 400m hurdles with Antonio Forbes taking top spot in 52.56s, as teammates Shamari Jennings (53.74s) and Diego Stewart (54.53s) took second and third.

KC also had a one-two finish in the Class Three 400m as Jordan Taylor won in 51.57s, ahead of teammate Shavaughn Brown, who was second in 52.62s, and Durville Jackson of Calabar, third in 52.73s.

JC swept the podium in the Class One Boys discus throw with Shamar Reid winning after a throw of 53.25m. Racquil Broderick and Jevon Campbell both threw 48.15m for second and third, respectively.