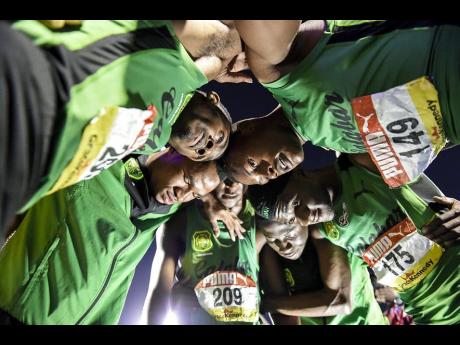 File
Members of the Calabar High School 4x400m relay team saying a prayer moments after crossing the line at the 2018 ISSA/GraceKennedy Boys and Girls’ Athletics Championships.

With two weeks to go before the ISSA/GraceKennedy Boys’ and Girls’ Athletic Championships (Champs), Calabar High School assistant coach Errol Messiah says that the priorities of the team are conflicted as it enters the final stretch of preparations...

With two weeks to go before the ISSA/GraceKennedy Boys’ and Girls’ Athletic Championships (Champs), Calabar High School assistant coach Errol Messiah says that the priorities of the team are conflicted as it enters the final stretch of preparations.

With the cancellation of Champs because of the COVID-19 pandemic last year, Calabar enters this year’s tournament with a renewed opportunity to avenge their 2019 defeat to Kingston College (KC). However, the junior track and field season has been met with various challenges, ranging from the late start in February as COVID-19 protocols were being finalised and approved, to the three-week stoppage in qualifying from late March to mid-April because of the weekend lockdown restrictions. Additionally, the spike in COVID-19 cases caused Champs to be pushed back twice to its current May 11 to 15 timeline.

With the uncertainty that has greeted the team from Red Hills Road this season, Messiah admits that while the focus among some of the athletes is another championship, there are others that are just relishing the chance to compete on this stage after seeing their 2020 seasons abruptly end.

“We have mixed feelings in the camp where some persons will think about winning and some will think about just being able to perform,” Messiah told The Gleaner. “The young men want to get rid of some stress, release some tension and stuff like that.”

The 28-time champions were without competition for eight months last year before returning at the Tyser Mills Classic in December, but had to wait the first two months of 2021 for the Government to authorise the return of track and field. Despite the limited opportunities for meets this year, Messiah says that it has been sufficient and that his team will be ready despite lamenting the absence of further meets on this year’s calendar.

“We could have gotten some more track meets but because of what is happening, we never got the chance to do it,” he said.

Messiah says that his goals this year are not just about mounting another title challenge, but giving his final-year students the opportunity to earn overseas athletic scholarships, a consequence of last year’s cancellation.

KC’s 2019 triumph ended Calabar’s seven-year winning streak, winning the title by an 82.5-point margin. The Last Chance Meets at the National Stadium, Stadium East, and Calabar were the last opportunities for athletes to attain the required qualifying standards to compete at Champs.