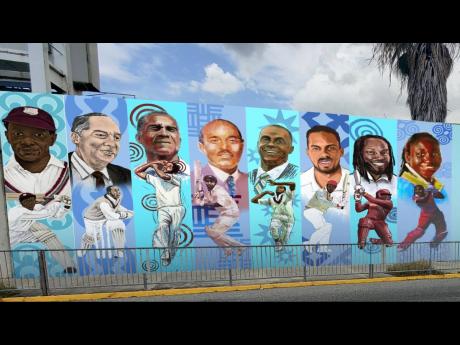 Contributed
A digital image depicting one section of the wall at Sabina Park, Kingston where 10 Jamaican cricket icons will be honoured. 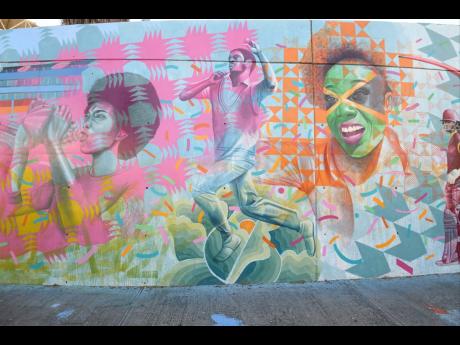 Ricardo Makyn
A mural depicting what many believe to be retired right-armed fast-bowling legend Michael Holding delivering a ball from his left hand, at Sabina Park in Kingston.
1
2

Several of Jamaica’s cricketing icons will be depicted in the form of a mural at Sabina Park in Kingston, as part of the Ministry of Sport’s latest project dubbed ‘Celebration’. The mural, which adorns one section of the wall with Jamaican...

Several of Jamaica’s cricketing icons will be depicted in the form of a mural at Sabina Park in Kingston, as part of the Ministry of Sport’s latest project dubbed ‘Celebration’.

The mural, which adorns one section of the wall with Jamaican cricketing and celebration images, will feature George Headley, Jackie Hendricks, Michael Holding, Jeffrey Dujon, Courtney Walsh, Jimmy Adams, Chris Gayle and Stafanie Taylor on the other section.

Sports Minister Olivia Grange, who commissioned the mural as part of Kingston’s major tourism push, says the completed project will be second to none.

“It is so exciting,” she said. “We are really going to town on this. It’s going to be mind-blowing when it is finished.”

The mural, which is being done by Mexican Irving Cano Gomez, is a ‘Jamaica 60’ Legacy Project and is being geared towards raising the profile of the ‘Mecca’ of cricket in Jamaica and utilising the venue as a tourist attraction to assist in the economic recovery efforts after the COVID-19 pandemic.

The project which was formulated with the assistance of the Kingston and St Andrew Municipal Corporation and the Mexican Embassy is part of the ‘Paint Up Yuh Creative Space’ project which has already produced murals in downtown Kingston (Temple Lane), Port Royal, and at Norman Manley International Airport.

Grange also sought to clarify controversy regarding a section of the mural which depicted an image in the likeness of Holding, that showed the legendary pacer uncharacteristically bowling with a left-handed action.

“What the artist did was look at images and mixed them in his creative expression on canvas,” she said. “The image was not meant to be Michael Holding. That image would appear to be ‘Mikey’ Holding, but that is not what the artist intended.”