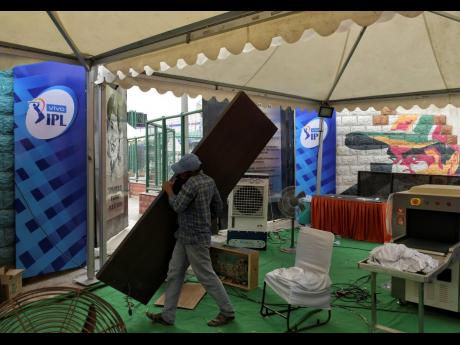 AP
A worker carries a part of body scanner after dismantling it at the entrance of Arun Jaitley Stadium, one of the six venues of Indian Premier League 2021, in New Delhi, India, Tuesday, May 4, 2021. The Indian Premier League was suspended indefinitely on Tuesday after players or staff at three clubs tested positive for COVID-19 as nationwide infections surged.

The Indian Premier League, cricket's richest and most glitzy competition, was suspended indefinitely after players or staff at three teams tested positive for the coronavirus on Tuesday amid a surge in nationwide infections.

Many of the world's best players compete in the Twenty20 tournament and were scrambling to find ways to get back to their native countries. Australia, for example, has temporarily barred travelers from India.

The Board of Control for Cricket in India decided to postpone the IPL, which started on April 9, after two staffers at Chennai Super Kings and a player for Sunrisers Hyderabad returned positive tests for COVID-19.

On Monday, the first cases involving players inside the IPL's biosecure bubble forced a game between Kolkata Knight Riders and Royal Challengers Bangalore to be postponed.

"The BCCI does not want to compromise on the safety of the players, support staff and the other participants," the BCCI said. "These are difficult times, especially in India. We have tried to bring in some positivity and cheer, however, it is imperative that the tournament is now suspended and everyone goes back to their families and loved ones in these trying times."

The IPL staged 29 games without spectators, at least one every night until Monday, despite India's stretched health system being pushed to the brink by another major wave of the virus.

India's official count of coronavirus cases surpassed 20 million on Tuesday, nearly doubling in the past three months, while deaths officially have passed 220,000. Staggering as those numbers are, the true figures are believed to be far higher, the undercount an apparent reflection of the troubles in the healthcare system.

The BCCI said it would do "everything in its powers to arrange for the secure and safe passage" of all players, but for some overseas players it wasn't going to be easy.

A decision this week by the Australian government to suspend all incoming flights from India and threaten big fines or possibly jail for anyone caught trying to beat the system prompted a wave of criticism. Commentator and former international Michael Slater vented on social media, telling Prime Minister Scott Morrison he could have "blood on your hands" for preventing Australian citizens returning in the next weeks.

Meanwhile, Cricket Australia and the players' union have been trying to work out contingencies to ensure the health and safety of players such as Steve Smith and David Warner, including charter flights to other countries.