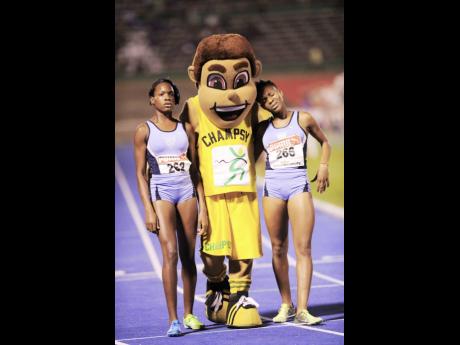 File
Marleena Eubanks (left) of Edwin Allen, winner of the Girls’ Class Two 1500m, and her teammate, Sanikee Gardner, are congratulated by Champs mascot Champsy, at the ISSA/GraceKennedy Boys and Girls’ Athletics Championships at the National Stadium on Friday, March 30, 2012. 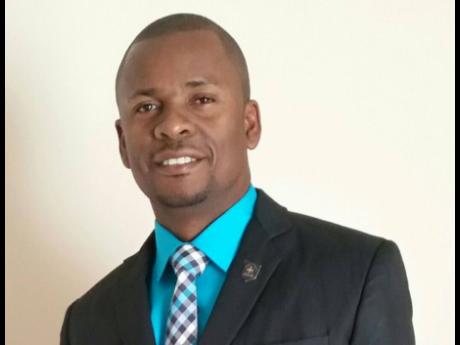 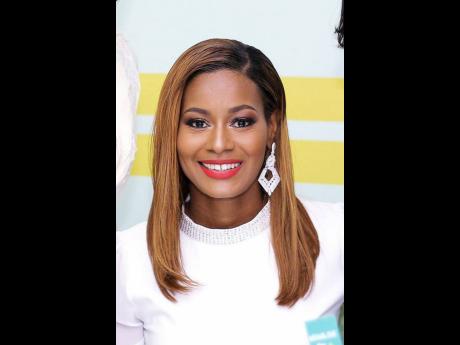 As high school athletes get ready to return to the biggest track and field stage in Jamaica, the ISSA/GraceKennedy Boys and Girls’ Athletics Championships (Champs), they will notice a glaring absence, with ever-present mascot ‘Champsy’ sitting out...

As high school athletes get ready to return to the biggest track and field stage in Jamaica, the ISSA/GraceKennedy Boys and Girls’ Athletics Championships (Champs), they will notice a glaring absence, with ever-present mascot ‘Champsy’ sitting out this year’s event, as a part of the organiser’s COVID-19 safety plan.

With Champsy’s bright yellow costume being left in storage this year and fans being banned from attending the May 11-15 championships, committee chairman Richard Thompson explained that they would be looking at other ways to bring a similar level of engagement to the event, like that which is usually provided by the character, while adding that they are also determined to provide the usual colour and energy inside the National Stadium, that the meet is known for.

The decision to bench Champsy, who usually interacts closely with athletes and fans throughout the championships, was guided by the organisers’ efforts to minimise opportunities for contact and, as Thompson explained, was an indication of ISSA’s commitment to delivering a safe championships, in light of the challenges posed by the coronavirus pandemic.

“We think we could have made it work with the mascot because there are other ways to interact, but we wanted to show the public that we were making an effort to ensure safety and the health of the athletes by at least sacrificing and eliminating that interaction altogether,” Thompson told The Gleaner. “We are seeking to provide avenues for interaction and support to the athletes virtually, where they are able to see their supporters cheering on a screen. So that is something else that we are looking to add while we minus the mascot this year.”

The pandemic resulted in the cancellation of last year’s competition and this year’s edition had to be postponed twice because of spikes in cases before government approval was eventually given.

In addition to no spectators, athletes are required to arrive at the stadium two hours before their respective events and will have to leave one hour afterwards. All participants – including athletes, officials, media personnel and volunteers, will also have to undergo a COVID-19 test before being cleared to compete or work at the event.

Sports Marketing Consultant Tanya Lee Perkins says that ISSA can still bring a competitive atmosphere for both the athletes and fans by way of branding as well as maximising online platforms.

“They can ensure that branding is available at the stadium to kind of create an atmosphere in the stands where it appears to have spectators, similar to what happens in football, because it would create a sense of having people there and it really builds on the atmosphere and the momentum for the athletes in the stadium,” Lee Perkins said.

“(Also) they can make use of audio and visual related to the schools in terms of school songs, some chants, anything that gets the athletes revved up and creates the atmosphere of competition that we are used to seeing at Champs. That has kind of been the hallmark of what Champs is and what makes it that glorious atmosphere that we like to come to see on TV, even though we are not there,” she added.