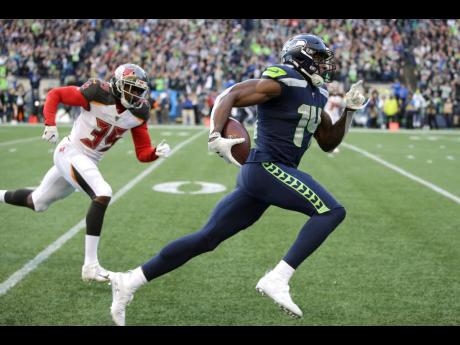 AP
Seattle Seahawks wide receiver DK Metcalf (right) runs to score a touchdown ahead of Tampa Bay Buccaneers defensive back Jamel Dean during the second half of a NFL football game in Seattle, on Sunday, November 3, 2019.

The newest sprinter in the game is tall just like world-record holder Usain Bolt and has quite an explosive burst – off the line of scrimmage, anyway.

DK Metcalf will soon see just how quick he is from a different line, the starting line.

The speedy Seattle Seahawks receiver is scheduled to trade his football cleats for track spikes Sunday, as he ventures into a new, faster lane for a 100m competition at the USA Track and Field Golden Games in Walnut, California.

He will put his feet to the test against Olympic-calibre sprinters. It’s a decision that definitely caught the attention of the track world, where athletes have for years been challenged by anyone, in any sport, who just happens to be fast.

This may be their chance to show, once and for all, that track speed is far different from football fast.

“There’s not a sprinter in the world who will let this guy think he can run with them. They will destroy him,” said track agent and former 110-metre hurdler Renaldo Nehemiah, who also played three seasons with the San Francisco 49ers. “It’s a noble gesture but an exercise in futility. It really is. No offence to DK, I’m a fan of his.

“I applaud him for wanting to find out – and find out he will.”

But what really got people buzzing about Metcalf’s blazing speed was when he chased down Arizona defensive back Budda Baker from behind after an interception to prevent what seemed to be a sure touchdown last season. Metcalf made up nearly 10 yards on Baker and reached a top speed of 22.64 mph in pads and cleats. He ran 108.8 yards on the play to tackle Baker short of the end zone.

“That was one of the best football plays I’ve ever seen,” Seahawks coach Pete Carroll said after the game.

“But if you put a world-class track athlete in the same spot, he would be 10 metres in front of Baker and waiting for Baker,” Nehemiah said. “People just don’t understand world-class speed.”

The speed of a sprinter is more linear, with mechanics and transitions focused on being as straight as possible. The speed of a football player tends to be more horizontal, and centred around quick five- to 10-yard bursts.

“I hope he doesn’t think he’s getting out here with some average Joes,” said 2016 Olympian Mike Rodgers, who will be one of the favourites in Sunday’s 100m race, where the top runners in round one advance to the final. “It’s a pride thing for track athletes. We’ve been hearing about this for so long. So giving him a proper introduction to track is going to be everything to everybody in the track world.”