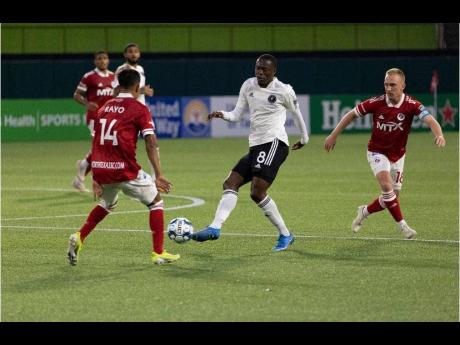 Former national Under-23 representative Venton Evans is confident after scoring on debut for USL League One outfit Fort Lauderdale CF in a 4-2 loss to North Texas Soccer Club earlier this week.

Evans scored a header from point-blank range in the 14th minute to give Fort Lauderdale the lead.

Despite being signed by Fort Lauderdale, Evans had been unable to play for a few weeks prior to that as he had not received his International Transfer Certificate (ITC) and P1 Visa.

“It was good to score,” he said. “It was a bit frustrating knowing that I had to be waiting for my ITC, but I have been working really hard, so it was good to see it pay off.”

The midfielder, formerly of Portmore United and UWI FC in the Jamaica Premier League (JPL), says that in some respects, joining USL League One has required some adjustment but he says he has been coping well so far.

“The game is a lot faster here and the guys are a bit fitter,” he said. “When I played in the JPL, the ball did not move that quickly, but things have been going well because I have put in the work to improve my fitness.”

Evans’ versatility and leadership qualities have not been missed by the team manager Darren Powell, who not only started him as soon as he became available for selection, but also shifted him between the right wing and central midfield positions.

Solid performances for the player could see him called up to the roster of Fort Lauderdale’s parent club Inter Miami, owned by former England and Manchester United winger David Beckham. Like many other young players, Evans also harbours long-term ambitions of eventually playing in a major European league. For now though, he is focused on this season.

“I am focused on continuing to do well for the club in the league,” he said. “I have targeted scoring about 11 or 12 goals this season.”