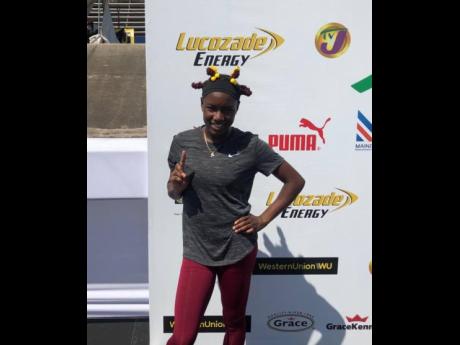 Holmwood Technical's Samantha Pryce, who won the Girl's 2000m Steepkechase at the ISSA/GraceKennedy Boys and Girls Athletics Championships at the National Stadium on May 11, 2021. Pryce won in 7:07.12.

In the Girl's event, Pryce pulled off an upset, after winning in 7:07.12 minutes, ahead of Edwin Allen's Sanyae Gibson, who was second in 7:13.63 minutes, with pre-race favourite, Rushel Johnson of St Jago, settling for third in 7:17.70 minutes.

Among the boys, event favourite Kirk Dawkins of Kingston College, got the better of 2019 champion, Rivaldo Marshall of Calabar in a close finish, to win in a personal best 5:52.74 seconds, Marshall, who also recorded a personal best, finishing second in 5:53.74 minutes. Jamaica College's Matthew Gordon was third in 6:04.79 minutes.