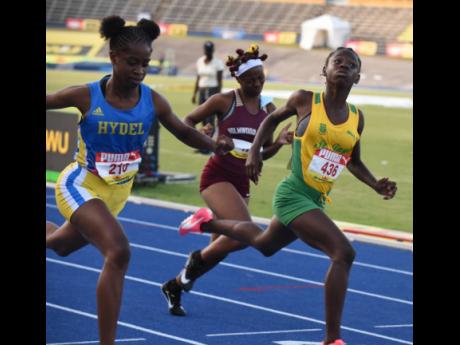 Ian Allen
Camoy Binger, 11.14, from St. Jago (right) wins the Class Three girls 80 metres hurdles final ahead of Jody-Ann Daley, 11.15, of Hydel and Kiara Meikle (centre) of Holmwood during the rerun of the final at the ISSA/GraceKennedy Boys and Girls Athletics Championships on Tuesday, May 11, 2021.

The Gleaner has been informed that several coaches with athletes involved in the controversial Class Three Girls 80m hurdles final, which was rerun yesterday at the ISSA/GraceKennedy Boys and Girls' Athletics Championships after an issue with the starters, are planning to protest plans for a second rerun of the event today.

Another rerun would mean that the event would face the starter three times in a 24 hours period.

Yesterday's final at the National Stadium was forced to go again, as a result of a second shot by the assistant starter, which was not heard by most of the competitors in the original race. It is understood that the officials are again proposing another rerun because the second race did not have all the hurdles in place.

In the first race, there was a 1-2 finish for St Jago's Camoy Binger, who won ahead of teammate, Briana Campbell.

Yesterday's rerun was also won by Binger, 11.14 seconds, who seemed to suffer an injury, with her teammate Campbell, 11.24, this time finishing third. Hydel's Jody-Ann Daley, 11.15, was second.

Early this morning The Gleaner was informed by one of the coaches that the officials were planning the second rerun of the finals because the athletes had gone over seven barriers instead of the required eight.

"My athlete will not compete as it is unfair for them to run three times ... myself and other coaches will protest this decision," said the coach who did not want to be named.