‘I could have done more’ 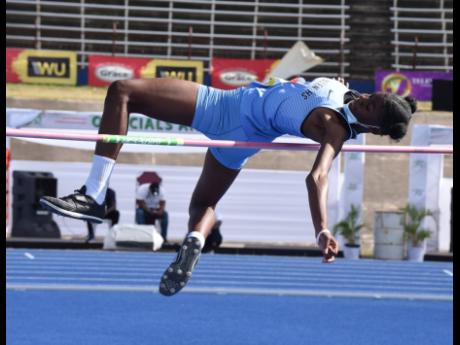 Ian Allen
Deijanae Bruce from Edwin Allen High School clears the bar on her way to winning the Class Three girls’ high jump final on day one of the ISSA/GraceKennedy Boys and Girls’ Athletics Championships inside the National Stadium yesterday. Bruce won with a clearance of 1.68m.

Despite capturing victory in the girls’ Class Three high jump at the ISSA/GraceKennedy Boys and Girls’ Athletics Championships inside the National Stadium yesterday, Edwin Allen’s Deijanae Bruce felt that there was still more that she could give, to produce an even better display.

Bruce secured the gold medal with a height of 1.68m, edging Wolmer’s Shanniqua Williams, who despite clearing the same distance, needed all three of attempts to do it. With Bruce only needing one attempt and both athletes failing at 1.71m, it was Bruce who ended victorious.

While the distance was enough for Bruce to earn a personal best, she felt that there were still opportunities that she left on the table for her to go even further in the event.

“Yes (I was happy with the performance) in a way but I wish I could have done better,” Bruce said.

Despite her muted celebrations, Bruce’s victory came as a surprise to some, as it derailed the momentum of St Jago’s Tori-Ann Anderson, who had the longest distance heading into the competition.

In comparison, Anderson, who set a personal best of 1.72m this season, only managed to finish third with 1.65m. She failed all three attempts at 1.68m, paving the way for both Williams and Bruce to do battle for the gold.

With gold firmly secured, her attention now turns to earning a spot on Jamaica’s team to the World Athletics Under-20 Championships, which is set to be held in August in Kenya.

“I just hope that I can do well and I will try my best to win,” Bruce said.

Her nine points helped defending champions Edwin Allen to 71 points and third place on day one, 10 points behind early St Jago High who sit at the top with 81 points. Hydel High School are second on 76 points.

Despite her team currently looking up at their rivals in the points standing, Bruce says that she was confident that Edwin Allen will be successful in defending their title this year.

Edwin Allen’s other final success also came from the field, as Shamoyea Morris captured gold in the Class Three discus. Entering the competition with a personal best of 39.19m, her third round distance of 38.54m was enough to secure victory.