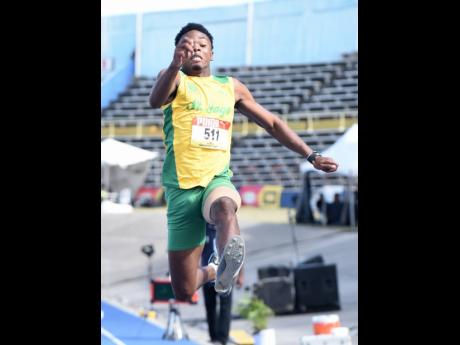 Ian Allen
St Jago’s Kavian Kerr produces a leap of 7.81m on his last jump to win the Class One boys long jump event at the ISSA/GraceKennedy Boys and Girls Athletics Championships at the National Stadium yesterday. 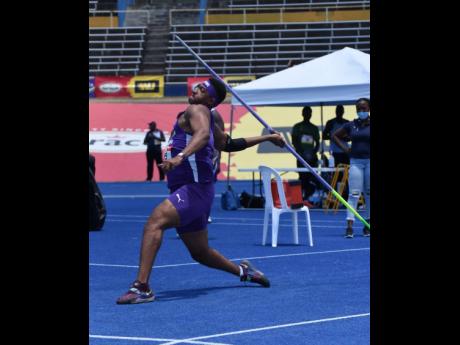 Ian Allen
Akeel Hanchard from Kingston College on his way to winning the Boys Javelin Open event at the ISSA/GraceKennedy Boys and Girls’ Athletics Championships at the National Stadium yesterday. Hanchard’s winning mark was 62.93m
1
2

St Jago’s Kavian Kerr could hardly contain his emotions after he produced a massive final attempt, powered by prayer, to capture the gold medal in the boys’ Class One long jump event at the ISSA/GraceKennedy Boys and Girls’ Athletics Championships at the National Stadium yesterday.

Kerr, who started his final sprint down the runway trailing the event favourite Luke Brown from Calabar, landed 7.81m in the sand, to secure a memorable win on the opening day of the championships, earning the applause of his rivals, including Brown, who he had trailed for the event.

Brown ended with a best mark of 7.65m, while Jamaica College’s Uroy Ryan finished third with a leap of 7.47m.

Kerr, who is competing in his final year at the championships, said his confidence was a bit low entering the event because he had been nursing a hamstring injury going into the jump.

“I am very surprised with my performance, words cannot explain how I am feeling right now,” said Kerr, before explaining the heavy wrap on his left leg. “I came into this championships at 70 per cent because I am currently recovering from a hamstring injury and so to PB (personal best) is an overwhelming feeling.”

“Honestly, before that final jump, I said a short prayer and I told God that this is either now or never and it was now and I was very grateful for this personal best,” Kerr said.

The St Jago man might have had the final say in the Class One boys’ long jump event, but it was defending champions Kingston College (KC), who made the most noise on day one of the five-day championships, after winning four of the six finals on the schedule.

KC leads the standing with 56.5 points ahead of rivals Calabar 38.5. They are followed by St Jago 31, St Elizabeth Technical and Jamaica College (JC) on 26 each and Excelsior on nine rounding of the top six teams.

Kirk Dawkins got KC off to a brilliant start when he defeated Calabar’s Rivaldo Marshall to win the steeplechase open event in a personal best time of 5:52.74 seconds.

A few minutes later, Akeel Hanchard kept the Purples in tune after securing his team’s second gold medal, when he won the javelin throw open event, with a mark of 62.52m.

Edwin Allen’s Christopher Young was second with a personal best mark of 62.12m, while third went to Andre Raymond from St Jago with a throw of 61.18.

However, while Hanchard was still celebrating his gold medal, the North Street-based institution suffered a massive shock, when race favourite Vashaun Vascianna pulled up injured in heat one of the boys; Class One 110m hurdles event. Vascianna, a St Jago transfer, is also doubtful for the sprint relay team, leaving a serious crack in KC’s title defence armour.

Nevertheless, KC managed to rally when Daniel Clarke sped to victory in 13.04 seconds to win the boys’ Class Three 100m hurdles. St Elizabeth Technical’s Ricoy Hunter was second in 13.19 seconds, while third went to Shaquane Hunter from Calabar in 13.28 seconds.

KC celebrations had hardly died down, as Tajae Francis sped to a 13.52 seconds win to claim KC’s fourth gold medal on day, this time in the Class One 110m hurdles. JC’s Jahiem Stern finished second 13.78 second, while Radjae of Excelsior finished a distant third in 15.25 seconds.

Today’s schedule for boys’ events will see the running of the 4x100m relay semi-finals, the decathlon, the sprint medley relay semi-finals and the preliminary round of the 100m and 400m events.

The lone male final set for today is the Class Two long jump.