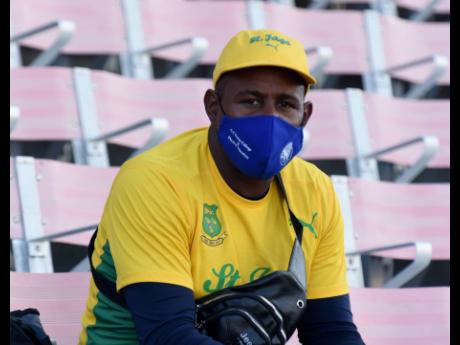 Although defending champions Edwin Allen High currently enjoy the lead heading into a critical third day of the 2021 ISSA/GraceKennedy Boys and Girls’ Athletic Championships (Champs) at the National Stadium, St Jago’s throws coach, Marlon Gayle, says that there are still opportunities to push and make things uncomfortable for the team from Clarendon.

St Jago ended Tuesday’s first day of Champs with 81 points or a 10-point lead on Edwin Allen, who finished with 71.

The school was boosted by three gold medals on Tuesday, consisting of the Class Two shot put title, which was won by Jamora Alves in a distance of 14.93m, while Shaunte Foreman, 1.84m, won the Class One high jump crown and Camoy Binger shared the gold medal in the Class Three 80m hurdles in a time of 11.14 seconds. That race also saw Binger’s teammate, Briana Campbell, earn a bronze in 11.24 seconds.

Through 14 finals, Edwin Allen have taken charge with 108 points, with St Jago sitting in second place with 96.

Gayle said he was pleased with how they have begun the championships and believes it will serve as a motivation for the team for the rest of the meet.

“It has been one of the best starts for us for quite some time. The field events are doing an exceptional job, so certainly, it’s a good start for those persons and an inspiration for the others who are coming into the other events,” Gayle told The Gleaner.

Gayle gave special credit to the work of Glenford Watson, who has been working with the girls this year, specifically in field, with Gayle’s responsibilities shifting towards the boys’ team.

“This season, he has done an excellent job simply because the amount of work we had to get done based on my roles and responsibilities as coach of the boys,” Gayle said. “He has certainty taken on the task, and he has certainly been more effective, certainly covering throws for both boys and girls, so he is pretty much my eyes when I am not there.”

St Jago will have five athletes from classes four, three and one looking to earn berths in the 100m finals tomorrow, including 80m hurdles champion Binger, who qualified from her first-round heat yesterday.

With the semi-finals starting this morning, Gayle said that there are crucial points to be won should they take advantage.

“It’s just a matter of the quality performances will be achieved tomorrow(today) and going into the weekend because tomorrow (today), we have quite a bit of finals, and it should be very interesting,” Gayle said. “It depends on who does better on the day in each of these finals.”