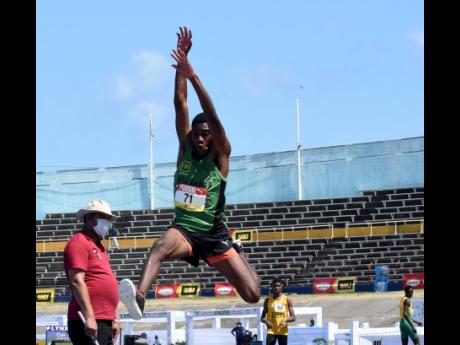 Yesterday’s Class Two long jump success by Calabar’s Nathan Wade brought as much pain as it did pride for the youngster, who dedicated his bronze medal at the ISSA/GraceKennedy Boys and Girls’ Athletics Championships to his slain coach, Nicholas Neufville.

The 38-year-old Neufville, who was known to friends and family as ‘Soapman’, was killed on Valentine’s Day, along with female companion Raheima Edwards, in Portmore, St Catherine.

Spurred on by his former coach’s memory and encouragement, Wade leapt to a personal best mark of 7.13m to capture his first-ever medal at Champs.

The event was won by St Jago’s Balvin Israel with a personal best mark of 7:32m, and St George’s College’s Amari Officer took the silver medal with a best mark of 7.16m, the best distance of his career.

Wade credited Neufville for playing a major role in his track and field career and could not hide his emotions as he shared his grief that the coach was not alive to see him stand on the podium at Champs.

“His death has affected me a lot because I was very close to him, and to know that he was killed in that manner was extremely sad for me,” Wade told The Gleaner.

“It was very tough competing without him, but I know that he was somewhere looking down, and I know he would be very proud of my performance,” Wade added.

Wade shared that he was often described by his teammates as Neufville’s favourite athlete on the team, adding that they both shared a similar birthday.

Meanwhile, defending champions Kingston College continue to lead the standings with 55 points after seven finals. They are followed by St Jago 40, Calabar 37, with St Elizabeth Technical (STETHS) and Jamaica College both tied on 30 points each and Excelsior on nine, rounding out the top six teams so far.

Among the impressive performers yesterday was race favourite Antonio Watson from Petersfield, who clocked an impressive 10.65 seconds to lead all qualifiers into today’s semi-finals of the Boys’ Class One 100m. Edwin Allen’s Bryan Levell was also impressive in qualifying after recording the second fastest time of 10.73 seconds.

St Elizabeth Technical High, who were the massive favourites to win the event, suffered a huge disappointment after their first-leg runner false- started.

Calabar’s time of 43.19 seconds is also the fastest going into the Class Three final set for Saturday.